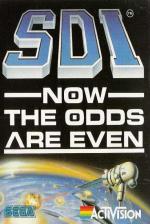 Not everyone loves Gorby, the hip Russian president. Who will the software houses use as enemies if he keeps disarming? Well, for the moment Activision are happy living in simultaneously both the past, with evil Ruskies, and the future with the fantastic Star Wars, or SDI programme - here represented by just one laser satellite.

You aim its laser by moving the cursor around the screen, hold down fire and you move the satellite too. While lasering your way through the oncoming missiles and space fighters you should watch out for bonus pods, offering extra speed, multiple cursors and extra firepower.

Between stages the player is presented with a statistical representation of their performance, a perfect 100% kill on all three types of craft (missiles, satellites and fighters) earns the player an initial bonus of 20000 points (this rises by 10000 points per round), and a nifty little dance routine from a troupe of ducks (I kid you not). If the required number of kills is not filled, the player is forced to defend him/herself from waves of marauding nasties on the similar defence screen. Again a points bonus is awarded for the percentage of hits scored, with 2000 points being earned for 100% damage. After this it's back to the offensive screen and the next barrage of Armageddon.

SDI strongly reminds me of Missile Command, and once the slightly quirky control method is mastered, zipping around the screen, shooting the missiles becomes very zzzz inducing. Graphically the game is fairly good, with some nice sprites over the boring star fields. Buy only if you're one of those people forever moaning 'they don't make games like they used to'.

'Gameplay is fast and furious, you have to control both the satellite and the laser cursor with the same joystick which can lead to some very frustrating moments, luckily there are two control methods, you just have to find the one that suits you best. All the sprites are detailed and the parallax stars in the background produce a good 3-D effect. Sadly sound effects are only average, with pathetic tunes, but SDI is still a great game for joystick-wrestlers.'

A great game for joystick-wrestlers.