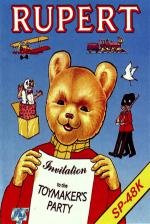 Rupert has been behind by his who have gone off for a taste of ginger beer and cream buns at the Toymaker's party.

Ravenous beast that he is, Rupert just has to get to all that food and you can help him past the guards and into the castle where the party is held. Just guide him through the eight levels, picking up the invitations which his friends have left behind to guide him on his way. When you have picked up all the invitations on one level, you can move through to the next.

Each level consists of four linked screens, which in turn have three floors. You can jump on barrels, potted plants and staircases to move to new floors. If one of the soldiers birds collides with you, Rupert will forced down to the ground level again.

In each section of the castle you have a limited number of lives which Quicksilva has decided to call Tumbles. The number you have will depend upon the level of difficulty. If you run out of tumbles you will be abruptly marched off the screen by a soldier. Disgraceful!

Rupert must be starving if he insists on being submitted to the gruelling tests of the Toymaker's castle. Why won't the guards let him into the castle? Has he collected enough invitations? Where is he putting them all? Why is a grown-up playing, this game? Those are not the sort of questions which young children will ask and Rupert is a game for the kids.

They might find that it is almost impossible to get off the third screen, or that the graphics are fairly simple, but that might not bother them.

The game is a disappointment. I used to be an avid Rupert fan and his appearance in this game is not how I remember him.

A disappointment. I used to be an avid Rupert fan and his appearance in this game is not how I remember him.