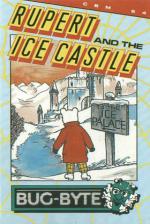 Jenny Frost is just as mischievious as her better known brother Jack. Whilst Rupert Bear's friends, Algy, Bingo, Edward Trunk and Badger Bill were visiting Jack in the Ice Castle, she froze them solid. The only way for Rupert to rescue his friends is to give them an ice pill which will thaw them out and allow them to return to their homes in Nutwood. Before he can reach them though, he must negotiate the assorted traps that Jenny has left for him.

The game is a simple platform variant. Rupert starts at the bottom of the screen and must leap from ledge to ledge as he tries to reach his friend at the top. He must avoid failling icicles, assorted toys and snowmen throwing snowballs. Any collision and Rupert loses one of his initial supply of ice pills. When he loses them all, he too is frozen and the game is over. One nice feature is the patches of ice. When Rupert steps onto one of these, he slides all the ay along it where there is inevitably a toy waiting for him. As the game progresses, there are items of clothing for Rupert to find as he searches for his friends. Control of the game is a simple left, right, jump and duck.

The most attractive feature of this game is its graphics. Rupert is large and instantly recognisable as well as being nicely animated. This is a simple little game, good value for its budget price and one that should appeal to younger players.

This is a simple little game, good value for its budget price and one that should appeal to younger players.