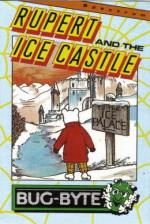 Rupert may be over 60 years old now, but he's still hopping about like a good 'un in Bug Byte's latest release

Rupert's chums have been kidnapped and frozen inside the Ice Castle, and it's up to Rupert to slip on his ice skates and rescue them with his special ice pills.

Inside the ice castle looks remarkably like a platform game, with little sprites of snowballs and toy cars bouncing around. If these touch Rupert, he loses one of his pills, and when he runs out of pills he too is frozen and the game ends. There are also patches of ice in all the rooms that you can skate over, though here you have to be careful as it's easy to skid out of control.

At first, the game looks a bit better than it actually is. The graphics for the scenes inside are all nicely designed, and Rupert himself is a large detailed sprite. But after a short time you'll realise that there's not an awful lot of game to go with the nice graphics.

Each of Rupert's friends are hidden in a separate screen, and there are three difficulty levels to play on. But, as poor Rupert only seems to have four friends, this gives you a grand total of just twelve screens to play on.

Each screen seems a bit tricky at first, especially as Rupert goes out of control whenever he collides with anything. But once I'd completed each screen and worked out a route that works, I was able to go through most of them over and over again without much difficulty. The first level of four screens took me about ten minutes to complete, and the next levels, though harder, soon started to seem repetitive.

It's a shame really - with a budget price and nice graphics, this could have been a good addition to the ranks of budget games, but with such a small number of basically repetitious screens, there's not much of a game here to play.

With such a small number of basically repetitious screens, there's not much of a game here to play.