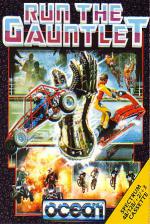 Now here's a turn up for the books. A conversion of an unconvertible idea and it's great! Not only is it great, Martin Shaw's in it and that makes it even better (or should that be worse?) Even though the picture of him is atrocious, you can still tell it's him. How? Because there's a speech bubble next to him saying 'Hello, I'm Martin Shaw'.

Run The Gauntlet is a game for one to four players, each playing a different country in this multi-event international challenge. There are three heats to each game, each with three separate events. To qualify for the next heat, you mustn't come last. The loser has to drop out.

There are dozens of 'actual' events, but each can be put in one of three categories. The first is the waterbound events. These involve one player and two computer riders in a mad three lap rave, sorry, race around a duckpond in a variety of vehicles. These range from jetbikes to hovercraft. The aim is to get the fastest possible time, even if you don't win. If you're too slow you won't get onto the next heat.

The waterbound section is arranged as a vertically scrolling top view rotate-and-thrust game. The scrolling is silky smooth and the animation is fab, right down to the flotsam left in the wake of the craft. Craft are rotatable through sixteen positions and are very responsive.

Next, you can try your hand on the dirt track, with things like buggies and jeeps. This plays in much the same way as level one, only it's a multi directional flip screener. Graphics are as good as level one. with great attention to detail. Little cameramen are dotted about the track, which twists, turns, rises and falls like a twisty, turny. risey, falley thing. Unfortunately, this level doesn't play as well as level one.

The third and final section, appropriately named, The Hill, has you as a contestant racing for all you're worth across the long and tortuous assault course. The graphics are fab, and the vertical scrolling is just as good as level one. It's a lot harder to play though. Left and right make the man walk left and right. Hold down fire and waggle the joystick left and right to build up power (to do strenuous things, like walk). Fire and up makes him jump, useful for getting over obstacles such as canyon walls and things.

Run The Gauntlet is a pretty fabbo game, but it does fall down on one minor point. It's very hard to start with, which can be a little disheartening. Keep at it, and you learn where the best points to overtake a computer rider are, and where all the interesting little shortcuts are, as well as becoming a more proficient player. Ocean prove, yet again, they know their Spectrum inside out.

(Said in best dimbo voice) it was good, I liked it because it was good.

A pretty fabbo game, but it does fall down on one minor point. It's very hard to start with, which can be a little disheartening.