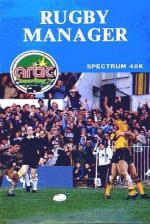 Rugby Manager is an attempt to emulate the all-time favourite football manager and has many similar features.

You have to pull your team from the bottom of the second division to the top of the first. This is done by buying and selling players, picking your team by balancing players' skill and energy.

To liven up what would be a fairly straightforward textual display of options an animated sequence of match "highlights" are featured showing the scoring (and near misses).

You have options to enter your own names for players, select your own team from a list of teams, sell players, buy players, see the league table, change players, finances, view status, quit, save game or play new game. The last nine are selected from an icon-controlled menu and an arrow-controlled cursor.

The screen layout is well designed and easy to understand, all the options I could think of are provided and you soon becomes engrossed in the problems of survival.

I like the easy-to-operate selection system and the well prompted input sections. The animated graphic section is a little elementary but as the game does not rely on it to any great extent it isn't important.

Overall, the old power still works in this game and anyone with the J.R. Ewing complex will be in their element. The cheap price adds to its attraction as well!!

One problem I found with the copy I had was there were a few bugs which cause fatal crashes. Selling player number two seems to cause this and on other occasions the message '0 O.K' appeared or the system reset itself.

I hope this will not be the case with the tapes in the shops.

The animated graphic section is a little elementary but as the game does not rely on it to any great extent it isn't important.