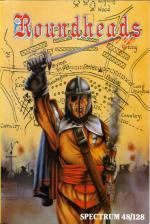 It's 1642, and the Royalists are fighting against the Round-heads. Troops rush around the country commandeering food, and are likely to change sides when they're too tar from home. You need a well contented, well-fed force before you can even think shout challenging the enemy. This is strategy! Alternating with this, you deploy men on the battlefield. There's varied terrain and three types of fighting unit, which is where your tactical ingenuity comes in.

At strategic level the screen shows a map of Britain, with armies frenziedly mobilizing. You need to be nippy on the keyboard as you prepare your forces for conflict. As you move your cursor, a close-up view scrolls in a window on the left of the screen. When you're ready to fight, move your cursor on to the enemy unit and press the challenge key. The challenge may or may not be taken up, though we never discovered why or why not. If it is, the game proceeds to the tactical level. The display changes to a map of the battlefield with the troops already in position. Now follows a rapid shoot-out between opposing forces. All good fun, if you like to play your wargames at breakneck speed. The more contemplative player can press the pause key when the going gets too hot.

The battles are based on historical engagements and vary in type from disorganised affrays to copy-book confrontations (infantry and artillery in the centre, cavalry on the flanks), and include a few sieges. There's plenty of variety to test your tactical skills. When you've had enough you can abandon the battle. After it's over, you return to strategic level again, preparing once more to fight. The game alternates between strategy and tactics until one side wins (the instructions say nothing precise about victory conditions.)

In short, the instruction leaflet is appalling. Lothlorien has been really mean. It took us ages to work out the mechanics of the game and what the map symbols represent. And were still in the dark on several important aspects of play. Strategically boring, tactically interesting and exciting, though too fast for well-planned and executed manoeuvres. Quirky at times. Buy it if you like a good, fast zap!

Strategically boring, tactically interesting and exciting, though too fast for well-planned and executed manoeuvres. Quirky at times. Buy it if you like a good, fast zap!