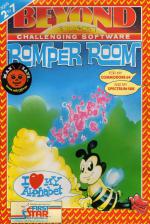 Romper Room represents Beyond's first shot at software for the pre-school child, and the cassette, like many in the future, I'm sure, contains versions for both the Spectrum and the Commodore 64. The press release tells us that "the whole game is interactive and fondly reminiscent of the old favourites Watch With Mother and Playschool, with the child encouraged to interact with the screen, keyboard and supervising parent".

The four games on the tape are all centered round the same basic idea, and represent four levels of difficulty. In the first game, Watch the Letters, the character Max introduces ach letter of the alphabet in turn (each is displayed in both and lower case), shows the letter is situated on the keyboard, gives a using a word beginning with the letter displayed, and acts the word out on stage. All the child is asked to do at this level is to watch, while the parent can join in by reading out the letters and sentences. As there is no way of breaking out of the game, however, it be comes extremely boring for a young child to watch all twenty-six letters at one sitting. The games does not allow the parent to select specific letters for the child to practise, which is unfortunate.

At level 2, the child has to participate by choosing a letter to press in order to get Max to perform the action - for instance, if D is pressed, Max does a dance. I was interested to find out the sentence for X and Z - "You can see by the X-ray that Max has no bones", and "Max gets Zapped, but he always comes back".

In Find the Letter, the player has to press the key which corresponds to the letter being shown on the screen, and in Letter Quiz all the skills covered in the previous games are brought together and overall this is quite a well structured package, with each game leading directly from the previous one in terms of the skills encountered.

Control keys: press the appropriate letter key to match the letter on the screen
Keyboard play: good
Use of colour: bright and attractive
Graphics: good

Press the appropriate letter key to match the letter on the screen. Good graphics.