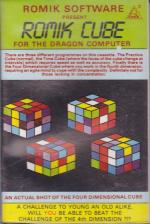 Everyone has heard of the infamous Rubik's Cube, that frustrating cube of plastic that became a national craze last year.

Well, Romik has brought out its own version for the Dragon.

The cube is well depicted on the screen and overcomes the Dragon's four-colour graphics cleverly. The program is in macine code and provides very fast 'twist' graphics in response to one of the long list of commands.

There are two other games on the cassette, if you find the standard cube too easy. The first one is a timed cube which changes the side's colour if you do not complete it quickly. The harder game is the 4D cube, an infuriating brain twister which I have yet to solve.

The actual game is a good one, extremely well implemented on a computer not really suited for it.

However, who wants to fiddle with the cube nowadays? Its interest has seemed to pass and Romik's version for the Dragon with the long list of instructions seems of little extra interest.

The game is exorbitantly priced at ten quid, a price which makes it hardly worth considering.

The game is exorbitantly priced at ten quid, a price which makes it hardly worth considering.