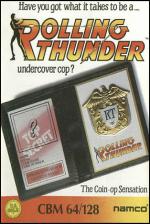 The year is 1960 and from his hiding place in New York, the elusive Maboo plots to conquer the world. Leila is a female member of 'Rolling Thunder' - the secret arm of the World Crime Police Organisation - who is sent in to expose this treacherous conspiracy. On her capture, however, the success of the mission falls to the player - codenamed Albatross - who must now overthrow Maboo's organisation, Geldra, and also rescue his comrade.

The mission is accomplished by successfully negotiating ten levels of Maboo's lair, which scroll past horizontally and occasionally vertically, allowing access to higher sections. Progress is made by jumping onto balconies, boxes or platforms and over obstacles such as oil canisters and killing all the guards who lie in wait. Later stages are made more hazardous by the inclusion of acid pools, which prove fatal on contact.

Each level has a specific time limit, and failure to finish before this deadline results in the loss of one of five lives. At the end of the last section Maboo is confronted in the final showdown.

Purple, yellow and white guards are encountered along the route: killing them requires one, two and three bullets respectively. They shoot, punch and drop bombs, which reduce Albatross's energy bar or kill him outright. Deadly automatic lasers and storming fire-man are confronted from the fourth level onwards, and are dodged or destroyed.

Doors are useful for avoiding enemy bullets or collectng extra firepower for two kinds of gun. By entering doorways marked with a bullet, an extra 50 shots are added to the initial 50; doors marked with a machine gun provide more powerful ammunition, but only 25 rounds at time.

It's a pity that blocky sprites, awful tunes and the odd bug take the polish off this otherwise reasonable conversion. Although the action doesn't vary much, it's easy to get into and the forces of Geldra put up a good fight on the later levels.

However, it's cursed with that most horrific of afflictions - sending the player back to the start of the level when he loses a life. For some reason this isn't quite as frustrating as in other games, and the game's mildly addictive qualities manage to weather play in spite of it.

It's a shame the programmers couldn't have expended as much effort on the ugly sprites as they did on the backdrops, most of which create a good 'Baddies Base' atmosphere (I know what they're supposed to look like - I've watched the Bond movies).

Rolling Thunder is one of those games which has playability in spite of itself. Not brilliant by any standards but the frustration element holds your interest for a while.

Although it isn't the best shoot-'em-up around, Rolling Thunder provides a good deal of blasting action. Although bearing feeble animation the total visual effect is attractively colourful and bright. There's always enough variety in the backdrops to make progressing to the next level interesting rather than a chore.

The gameplay is well above average: it's not too frustrating to prevent progress, and not too easy to prove tedious. There's some precise timing required, but the action isn't dependent on it, so the gameplay isn't a matter of performing the same boring moves over and over again.

As a result, being sent back to the beginning of a level doesn't impinge on the enjoyment. It's not perfect by any means, since the guards can only punch one way, and they only ever fall backwards: so, if shot in the back, they leap towards you - sometimes with unfortunate results.

The playing area isn't huge and there are only ten levels; nonetheless, while it lasts, Rolling Thunder is entertaining enough to be a worthy purchase.

I've always thought that Rolling Thunder would make a brilliant C64 game - the graphics aren't overly sophisticated, the tune is ideal for the SID chip to copy, and the gameplay lends itself very nicely to the Commodore.

US Gold's conversion certainly captures the spirit of the original arcade machine, but unfortunately the program is flawed and has some very shoddy and unprofessional aspects.

It's almost as if it was rushed towards the end of its schedule and the programmers weren't given time to fine tune the game and add a little gloss and polish. For a start, the graphics are very poor: the sprites are horribly blocky, the animation isn't like the arcade original and the backdrops lack crispness.

The sound is worse - the dire soundtrack had me reaching for the volume control within a few bars. Why not get a musician to copy the arcade soundtrack?

The game plays quite well, and I did enjoy the action on offer - I'm a great fan of the arcade version - but I always had a niggling feeling that it could have been so much better. If just a little more time had been spent tidying up, and more care and attention paid to the graphics and sound (after all, it is an arcade conversion), Rolling Thunder could have been really special.

As it stands, it's merely a competent arcade conversion that provides sufficient entertainment for its price tag.

Hookability 80%
Once the slightly clumsy controls have been mastered, action is plentiful.

Overall 76%
Only a mediocre conversion, but a playable game nonetheless.

Only a mediocre conversion, but a playable game nonetheless.