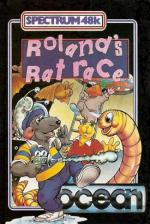 It all started when Roland got up, late for work and not exactly feeling on top of the world. As if being late wasn't bad enough, Roly finds out that his rather decrepit car won't start. Disaster! Still, there's always the short cut through the London sewer system which Roly knows so well from his lurid past life as a city rat. He'll make it to the telly studios before nine o' clock, don't you worry.

Being late is, however, the least of his problems. A highly disreputable bunch of nasties have kidnapped Roly's friends.

Yes, you've guessed it Errol the hamster and Kevin the gerbil are in deep trouble.

Out of the goodness of his heart, Roland decides to set out and rescue Errol and Kev. To do this he has to find the key to unlock the door to the nasties' secret hideout. However, before he can unlock the door, Roly has to actually assemble it! Pieces of the hideout door have been left lying around the sewer network careless of the baddies, eh? Unfortunately, due to the fact rats ain't that strong, Roly can only carry one bit of the door at a time. Whenever he collects a piece he has to fit it into place before he can pick up another.

Worse still, there are pairs of wellies trotting around the place that weaken Roland each time he runs into them. Fortunately though, Roland is armed with his Instant Stic-O-Matic glue gun that can eject globs of glue with deadly accuracy, c piece of equipment that is definitely not to be sniffed at. It can be used to temporarily stop the wellies in their tracks and can bring Roly himself to a halt with a badly aimed glob.

If our furry friend's energy should run out then it's curtains for him and his mates. Throughout the sewer there are apples and hamburgers which Roland can eat for extra energy, but these are in limited supply and must be eaten strategically. A few glue packs are also lying around conveniently, to boost Roly's supply.

Way down in the darker depths of the sewer there runs a regular train service which Roland can catch through timely use of his glue gun. If he's not careful though, he'll end up getting run over and lose a lot of energy in the process.

Once Roland's assembled the door and opened it to release his chum, only worms and electrically charged areas stand between him, his pals and freedom. But at this point Roly can't use his glue gun! When Errol and Kev have been saved, the trio are transported to the surface and the game starts over.

'This is one translation from Commodore to Sinclair that I feel hasn't quite worked. The graphics are occasionally quite indistinct and aren't as effective as those of the original. The replay isn't as good either. The lack of true sound or music doesn't help because this was one of the stronger points of the Commodore version. There isn't much to add other than the fact that Roland's Rat Race is quite a simplified arcade/adventure/platform game that is difficult to play and becomes repetitious and tiresome after a few games. And there's no high score facility!'

'Here at last is the game that everybody who watches telly in the early hours can't help but know about. The first (and only I hope) game starring that loathsome creature Roland Rat seemed to me to be a bit of a let down. I found the game was uncompelling. The graphics are quite good but they get very muddled up due to the attribute problems. The speed with which new screens are displayed is too slow and looks as though it could have been written in BASIC. There are a few nice touches however, like the traffic overhead and the various types of food scattered around the sewers but these things don't make up for the unplayability of the game. I wouldn't strongly recommend this game to any hardened gamesplayer but l think it might appeal to younger Rat Fans.'

'The theme of this game is not very original - get a certain person to a certain place by a set time, while avoiding the nasties. I still don't know why Roland is equipped with a glue gun of all things down the London drains, but never mind, it comes in quite useful. The game is a not-so unusual platform game, but on a fairly large area. There is nothing really new on the graphics side, a bit of basic animation is about the biggest thrill graphically. Colour? Well perhaps a little more thought could have gone into it. In other words boooorrriiinnng. The game play isn't much better, there just doesn't seem to be enough going on to keep the interest from flagging. Overall I think that Ocean have got it all wrong this time, hopefully they won't next time.'

Boooorrriiinnng. There is nothing really new on the graphics side, a bit of basic animation is about the biggest thrill graphically.