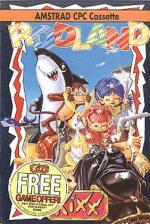 In the beginning, there was cute. Then, as the mountains of fluffy pink things started to erupt, DJ Puff was slammed for being a little too cuddly. So what happens when Amstrad Action towers are hit by a blimp of fur? Do we evacuate? No. We sit down and review the blimp - Rodland. [Is it me or was all that ever-so-slightly surreal? - Ed]

So. there's these two pixies, called Tam and Rit, whose "Mom" has been taken prisoner by some villainous thing. Anyway... These two fluffy things (I envy that hair) journey through the vast and treacherous Rodland, killing fluffy things.

Enter screen one with Tam and Rit standing in wait. A cute furry space hopper sidles up. The seemingly passive Tam grabs it and flings it over his head. Thing hits the floor - poor thing. Tam hasn't let go. Instead, he's thrown him the other way. And back. Thing dies. This fairy tale has suddenly turned into a furry massacre, and that's the whole point of the game. It's a platform fur frenzy. Okay then...

There's a fun range of things to nobble, from furry lumps, sharks and lobsters, to clouds. There's also an impressive range of Cybernoid-style ways to kill them with the weapons left behind when Tam or Rit kill something.

First, there's the standard missiles that fire when you touch them, obliterating so many cuddly toys on their way. There are bouncing bombs that move round the screen and usually manage to take out most of the bad guys, and there's dynamite, which sends a horizontal blast in both directions, killing lots of poor, unsuspecting (but incredibly violent) balls of fluff.

The fun doesn't stop there though. Tam and Rit can build ladders, allowing them to get to inaccessible platforms, jump through doors (kind of like a teleport), float on balloons, and do all kinds of wonderfully cute things that'll aid them in the relentless slaughter of more things. A few points bonuses (as bounty on the critters' heads), and that's all there is to it as far as concept, gameplay and everything else is concerned.

Graphically, Rodland is pleasing. The graphics are all well animated, with loads of different creatures, each of which has its own movements, characteristics, and speed. The game is complemented with a variety of backdrops, with sky, clouds, and the odd wall.

The sounds are all quite cute as well. There's a garish little title tune that'll make you quickly reach for the volume control, but once you get into the game, the sound effects are used sparingly and effectively, with a fairly terrifying skull-crunching sound to complement the brutal abuse of the cuties.

Gameplay is excellent. What more can I say? You're running round, splatting everything in sight, and it feels great. You've been provided with a whole arsenal of anti-cute weaponry, all of which you can use with the greatest of ease.

There are still a few niggles you'll have, though. Every now and again, you'll get swamped with fur, and somewhere inside that lot, you'll be dying. It's also impossible to pick up half of your bonuses, as you only get about two seconds after all the fluffies are dead to collect them.

If you thought DJ Puff, or maybe even Seymour was cute, you must see Rodland. Normally I hate cute-'em-ups, but this goes beyond that. It's two-year-old-with-chocolate-round-the-mouth cute. You expect Tam to give the bad guys a nasty pinch rather that cave their heads. Got the idea yet? CUTE. OKAY?

Altogether, it's a worthy title. The levels multi-load, but don't take that long and are worth the wait, so if you haven't already got it, go out and get it.

Sonics 80%
In game effects use sparingly and effectively, but naff title tune.

Grab Factor 90%
Ever wanted to crush the Easter chick? Now's your chance.

Staying Power 90%
And the roar of the crowd and the sound of fluff against fluff never leaves you.