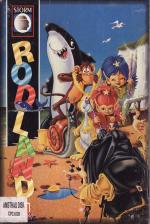 A land populated entirely by chaps in beards who wander round making sarcastic comments and giving people funny looks. [Pardon? - Ed] Fear not, dear readers, this game has nothing at all to do with our beloved Ed. Not unless he's really called Tam or Rit and secretly wears a fairy costume underneath his ordinary clothes.

Hero are some questions:

Never mind. Rodland is from the Bubble Bobble school of computer games. You have to collect some flowers whilst avoiding the baddies on lots of single-screen levels (there are 40 levels in all). It's the sort of multi-load game that will drive many 464 owners mad, but there you go.

If you collect all the flowers you get to play a so-called 'bonus game' where you simply have to wax any baddies you didn't do over while you were collecting the blooms. You despatch them by rodding them and then throwing them over your shoulders a few times and banging their heads on the floor (sigh).

When killed, the foes turn into weapons. There's a chance they'll then kill some of the other enemies (if you're lucky!).

Rodland moves slowly and is a bit of a tired old formula. But it's easy to get into, there are plenty of levels, and if you liked Bubble Bobble then chances are you'll like this too.

Cor, almost looks like an Amiga game, doesn't it? Pity it runs at about a millionth of the speed... the general sluggishness cripples the gameplay.

Get to level eight.

Grab Factor 75% You've seen this game before - it's Bubble Bobble without the bubbles. Easy to get into.

Staying Power 72% Forty levels makes for a fair amount of challenge. But let's be honest, innovative it ain't.

Cor, almost looks like an Amiga game, doesn't it? Pity it runs at about a millionth of the speed... the general sluggishness cripples the gameplay.