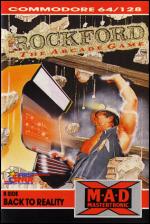 The player of Rockford adopts one of five roles according to the world confronted. As a cowboy, chef, hunter, doctor or spaceman he faces a series of screens appropriate to those characters, and any of the five worlds are initially selectable.

The action is displayed Boulderdash-style, each level spread over approximately four, four-way scrolling screens. Above the display is an information strip showing the number of items left to collect, the time and lives remaining, and the current score.

The required number of treasures need to be collected before the time expires, otherwise a life is lost. Rocks and monsters must be avoided, with some monsters creating new treasure when squashed by falling boulders. Additional features hinder progress such as fire, water, snakes and expanding walls.

When one of the four levels within a scenario is completed, a door opens and the player is placed in the next section.

The package includes the previously released Back To Reality.

After the classic original, two very good sequels and a construction kit, further Boulderdash releases need to be pretty innovative to make any waves.

It seems the only reason for the appearance of Rockford is the weak Arcadia coin-op, and apart from the gaudily restyled graphics (which only serve to detract from the intentionally simple gameplay) Rockford is pretty much the same as its predecessors - except for the jerky push-scrolling, that is.

With the earlier versions available for around the same price, dig out the originals.

I would hardly call this 'the ultimate version' of Boulderdash nor anything approaching it. The comical tone of the instructions rebounds on the game itself, since the gameplay is a backward leap from the Statesoft version.

The backdrops are appealing, with plenty of colour and some neat effects such as the rosy apples and smiling masks. Nonetheless, they and the individual characters don't differ significantly enough to prove attractive in themselves. In the end, all the elements behave in the same way as the original: expanding walls, objects which need to be combined to produce more objects, creatures and rocks to avoid - the difference is that they move much more jerkily.

When Boulderdash is available for the same price, without the hindrance of a terrible B-side game, why produce an inferior version?

Graphics 41%
Very colourful but blocky and indistinct; not especially cute.

Sound 49%
Weak and sparse effects, but some appealing tunes.

Overall 31%
A poor variant of a four-year old theme.

A poor variant of a four-year old theme.