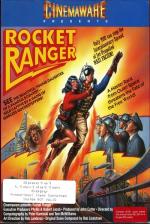 Eins, zwei, eins, zwei, eins, zwei... Twilight falls on Europe and hordes of goose-stepping Nazis are engulfing the west in a curtain of blackness. Back in Berlin, that nasty little bloke with the most dangerous inferiority complex ever (much worse than Maff's!) and a really silly black moustache is plotting to take over... guess what? The East? America? Africa? Nope - the whole of the rest of the world. Heil Hitler an' all that.

How's he gonna do it then? Well, listen carefully, 'cos I'll only say this once. There's enough lunarium (a very secret and dead powerful mineral) on the moon to build just the right number of lunarium bombs, Once you've mined it using a slave colony of chain gang women, terrorised by big metal boots and heavy whips, all you have to do is put it in a rocket, send it back to earth, get a few scientists together and (hey presto) you've got a weely big stockpile of lunarium bombs.

Got that so far? Right. Next thing. Drop all the bombs all over the world and the ID of males everywhere is reduced by 30%. After that, you'll probably have a planet ruled by women, but good old Adolf hasn't thought of that yet. All he wants is a great stonking pile of lunarium and that's exactly what he thinks he's gonna get.

Well... er... depends on you, me old son, dunnit? That's 'cos you're that hunky, cool and mega-muscly Rocket Ranger bloke, the only secret spy to propel himself around the world using a lunarium driven power pack. If you want to save the world, you've got to infiltrate all the Nazi rocket factories, find enough bits to make your own rocket, nip off to the moon and destroy the dreaded, horrible, nasty lunarium base. Hurrah!

Hang on, hang on, you haven't done it yet, dummy. Before you even get anywhere near the celebrating bit, you've got to rescue a kidnapped scientist and his daughter, try to disable a highly explosive Zeppelin without blowing it up, give instructions to five secret agents, act on their findings, take trips to South America, gun down Luftwaffe fighters and remember to pick up all them gadgi little rocket bits. Only when you've got them do you get to go to that big yellow cheddar cheese in the sky. Yessiree - the moon.

So that's the mission, guys. The rest of it is up to you.

Mirrorsoft are releasing some pretty impressive games these days - what with Bombuzal and Speedball on the Image Works label, and now this brilliant Cinemaware product. The thing that most impresses me is the presentation - for a start, none of the disk access is too long, and the disk-swapping isn't really a pain.

Then there's all those brilliant flying scenes between the action, the well-scripted storylines, the humour... It really brings out all sorts of skills - you need strategy to employ your spies carefully, quick reactions to fight increasingly tough German soldiers, a sure aim to avoid blowing up the Zeppelin - it's all in there. Basically, for disk owners, this is a must, especially at the price.

Was I impressed with this when I first saw it, or was I impressed? Well yes, actually, I was really, ultra impressed and that doesn't happen to me all that much when I see Cinemaware products - usually, it's a "nice graphics, shame about the gameplay" sort of situation.

Well, Rocket Ranger has absolutely fantastic graphics which make very professional use of the good ol' C64 and the sort of fast-action serial plot you can really get your gnashers into.

So what else has it got? Great presentation, pretty packaging and some extra-atmospheric music and sound effects. If you've got a disk drive, sell your pet hamster but don't miss this.

Well, I was dead impressed by the Amiga version of Rocket Ranger but I'm really knocked over by what they've done with the C64. The graphics, the sound, the presentation, all the gameplay, just pushes the C64 right to the limit of its capabilities.

There are so many clever touches (the SOS screens, the Ranger's shadow as he flies across the world map, the 3D) that the whole thing really captures the atmosphere of those 1940s serials you still get the chance to watch on TV.

And it's not just that - there's enough to the gameplay to keep you fighting Adolf for hours and hours. Don't miss it!

Presentation 97%
Excellent opening and inbetween episode cinematic sequences. Just like being at the movies... well, nearly. Two disks - but the multi-load is brief and unobtrusive.

Sound 70%
Dramatic music, but most of the in-game sound is limited to reasonable effects.

Hookability 92%
It's so atmospheric you can't resist having a go.

Overall 95%
One of the best disk products for the C64 *and* Cinemaware's best game yet. Not bad, huh?

One of the best disk products for the C64 and Cinemaware's best game yet. Not bad, huh?