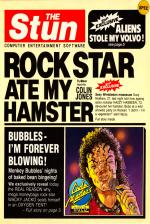 Now we all know that the Darlings are a bunch of loveable funsters at heart. Always involved in some wacky jape, usually when a photographer just happens to be in the area. But who'd have guessed that underneath those toothy smiles and trend-setting baggy Codemasters T-Shirts lies a rapier wit capable of sending up the entire music industry in one computer game?

The proof lies in Rock Star, reputedly a last minute rewrite of the long-awaited Professional Unicycle Simulator, in which the Code Masters' unique talent is revealed. And in case you doubt their abilities in this area, fear not. Apparently they've 'play-tested this game extensively and found that the way-out sense of humour appeals very well to players.'

Cast in the role of a rock star manager, your task in this 'hilariously funny spoof on the Pop Biz' is to set up a group and, well, manage them. The first job, of course, is to select the members of your band. These load in individually, and are generously located on a separate tape, rather than the reverse of the first one. It's obviously much better value this way, especially when you consider the free Drop Dead Clive! badge and assorted stickers. And all for tenner!

The popsters at your disposal include Bill Collins, Dross, Annie Smallpox, Michael George and a host of others. Sound strangely familiar? Well actually they're all cunningly based on real-life stars, and I still can't help smiling when I think of them.

So with your group selected, it's time to plan your strategy. You have four choices from the main menu: practice (to get your group up to scratch), gig (you'll need to pick a venue and fix a ticket price), publicity (try to generate some hype in the press, with uncertain results), or gifts (buy prezzies for the band to keep them happy). If you manage to get spotted by a record label you'll also have the option of recording an album or a single. These are 100% Speccy generated, and true to life they sound almost indistinguishable.

And when you've made your choice and seen the consequences, you can, um, make another choice. (There are five to pick from after all.) But it's not all laughs. Sooner or later the top ten will be published. It your group feature in it you could be on the way to achieving platinum, the aim of the game. You'll also need to be able to master the latest lingo used in the trade. Would you sign an act that was described as 'happening', 'groovey' and 'outasight'? Or would you give them a wide berth?

Rock Star's totally brilliant humour is undoubtedly its strongest selling-point. And if that sounds appealing you'll no doubt revel in the extraordinary monotony of the rest of it. The music industry will never seem quite the same again.

Laugh? I nearly played it twice...

Hilariously funny? Well perhaps, but not quite in the way they intended. Please don't make me load it again!

Hilariously funny? Well perhaps, but not quite in the way they intended. Please don't make me load it again!