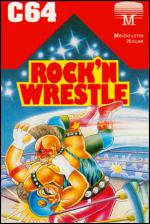 The only thing missing from this excellent grunt and grapple simulation are the grannies who rush into the ring and bash their least favourite wrestler!

Rock 'N Wrestle brought to you by the Fist people - captures all the atmosphere and fun of the wrestling ring.

Basically the idea of the game is quite simple. Play a friend or the computer and beat your opponent. Couldn't be easier, right? Wrong! The computer is a tough cookie - and until you learn the ropes you'll end up on the mat more often than not.

There is an amazing selection of 24 moves to cope with! You'll never learn all the moves right away - it'll take several games before you've really got total control over your wrestler. But it's fun getting to know them all.

The wrestler graphics are big, very attractive and totally convincing. You really take on the character of your chosen wrestler when you play. Sound effects - all the grunts and groans - are terrific too. But the game could've benefitted from some crowd noises to add that extra bit of realism. Instead you get a tinkly little tune which chugs along in the background.

There are ten wrestlers to compete against - or if you're playing a friend, you can choose which of the wrestlers you want to become. Playing against the computer, you have to be Gorgeous Greg - something of a disadvantage we felt! And the other wrestlers look like refugees from that odd American group The Village People - there's a red Indian, a leather man, a cowboy, etc, etc...

Rock 'N Wrestle is an exciting and original game. Not as instant as Fist - you'll need to be prepared to spend time learning a whole new way of using your joystick - but a game that will keep you in a headlock for months.

Wrestle a copy from your local software shop now - you won't regret it!

An exciting and original game. Wrestle a copy from your local software shop now - you won't regret it!