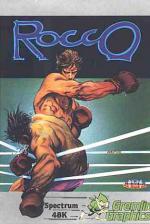 FROM Gremlin comes your second sparring partner, Rocco. Your boxer has his back to the screen and his opponent facing outwards. Blood, sweat or teeth fly - you can't be sure which - every time a punch goes home.

In the first fight, Cimbel-Lin must be knocked out three times before you can move onto Ted Mature. The first bout is easy, but Ted poses a few problems. Next, bludgeon your way past Jansen Sino to take on Fighting Bull - a Mr T lookalike with fists like sledgehammers.

More care has been taken over the graphics in Rocco than in its rivals. They are clearly defined and even the faces are expressive. However, the perspective makes your player look like a dwarf compared with the massive bulk of the contender. That gives you a clearer view, but it docs appear to be an unbalanced fight.

It is almost impossible to defend yourself properly using the joystick and not much easier with the keyboard. You can neither dodge from side to side nor duck.

Rocco is not wildly addictive and once you have mastered the controls, it soon loses its initial impact. Very much an also-ran.

Not wildly addictive and once you have mastered the controls, it soon loses its initial impact. Very much an also-ran.