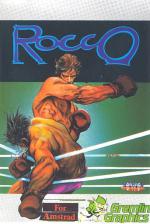 Physical violence seems to have been this year's theme for computer games and this is the latest for the Amstrad. It's another boxing simulation in which you have to fight your way past four opponents to gain the world championship title.

The screen gives you a view of the ring from behind the head of your boxer. Facing the screen is a mean looking dude who looks set to spread you all over the canvas. There are four fighters to compete against - Cimbel-Lin, Ted Matare, Jansen Sino and Fighter Bull. Whichever one happens to be in the ring the fighter always looks the same and performs the same graphic actions.

The aim is to knock the opposing fighter down three times by reducing his strength gauge to zero. You also have a gauge and this is reduced every time the opponent lands a punch. There are only four basic actions - left and right punches and left and right defense. This means the action is very repetitive and once you've discovered the pattern of how to knock down the boxers it's easy.

When knocked down the opponent disappears from view and then rises back up again for more punishment. The graphics for the punching are good but again too limited in scope. On the third count the bell rings and you progress to the next opponent.

In the first round of bouts you face each of the four opponents (no real difference), then the last three, then two, then just Fighter Bull. At the end, you are proclaimed champion of the world and that's it.

Even if you don't work out the pattern of the boxers' actions you can beat them to the punch quite easily when they're unguarded, so you should have no trouble handing out some real hidings. All this makes the game very disappointing and your money would be better spent on Frank Bruno's Boxing for a tougher more varied game.

The graphics were superb - to begin with. But the limited options meant that the game rapidly becomes very dull. And what is the point of having four 'different' fighters if they all look exactly the same and use exactly tho same moves? This game could have been, and should have been, much better.

N. Gameplay is monotonous.
N. Too few punch options to be interesting.
N. Only one real opponent despite name changes.
N. Not as good as Frank Bruno's Boxing.
N. Far too easy to master.

Very disappointing... Your money would be better spent on Frank Bruno's Boxing for a tougher more varied game.