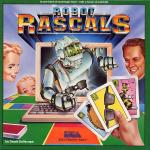 Well, it had to happen, I suppose. Computer games have been threatening to incorporate board games for some time now, and the Domark brothers brought the two unnervingly close in recent months. Enter Ariolasoft/Electronic Arts (last heard of on Marble Madness) with one of the strangest games of the past year, and potentially one of the most enjoyable.

Basically, this is a treasure hunt game with lots of frills. The screen is split into three main windows: one showing the whole map, one a localised area, and one depicting your particular robot character. There is also a text window for information on your progress and a rather useless colour bar just in case you couldn't tell by shape and name alone which icon was yours.

The object of the game is to find a variety of items (there are 24 in all) and return them to the start point of the game - the first one to do so declares it (the computer will take your word for it) and that's that. There are two things that determine the objects you search for; the Item Cards and the Luck Cards - you will find a pile of each in the box and you leave them face down on the table for all the players to take one when instructed.

The item cards have one object pictured on each. Basically, you should be searching for the objects you hold, and you may hold four item cards at one time. The Luck cards give you instructions as to what should be done with your current hand of Item cards and this does not take into account which objects you may already have found. Thus you may have already retrieved an object when you are instructed to give away that particular Item card - in this situation you may either hide the object making it hard for the player who holds the card, hope that the card comes back to you, or hang onto the object and force a confrontation at a later stage. The Luck cards may instruct you to change, swap or discard any or all of your Item cards and obviously this gets more absorbing the more players are taking part.

In no time at all, the frustration involved in this part of the game far exceeds the enjoyment to be derived from the rest of it, and leads me to believe that Robot Rascals is probably a lot more fun at a party than hunched around your average domestic TV.

You may pick one of ten robots to be your player in the game. In effect your choice makes no difference as they all trundle about in the same way, with no noticeable features or distinctive properties. On screen they move in a particular way, but this is the height of their idiosyncracy, and I think EA missed out here on the chance for some fun role-playing. Anyway, once picked, you can muck around with the energy levels to give you a fair or unfair handicap relative to other players, and start the game. You pick your four item cards and set off (using the joystick) across the on-screen terrain until the energy for that move runs out.

You don't have to exhaust all your energy; indeed, it is better not to, but some types of landscape take it out of you more than others. To help you there are teleports dotted around the island, and your robot also has the power to scan for any particular object.

When scanning, your on-screen character rotates until he detects the object, stopping and indicating the direction you should proceed in. The faster he rotates, the closer you are - and if you are close enough to pick it up it will be automatically retrieved for you. Both scanning and teleporting, however, cost energy, and if you want to defend your droid against attack from another player it is best to save enough energy to construct shields. Whenever you terminate your go, the computer instructs the next player to take his turn.

At the start of each move, a global condition is set by the computer which governs all players - this covers everything from 'Free Scanning' to 'More Energy' and may help or hinder all players on equal terms. When everyone has made their move the computer picks a new global event and the cycle starts again. It also picks some short and cute ditties to announce major events in the game (I especially liked Home Sweet Home when you reach base) and keeps tally on which objects are owned by which player (but not which Item cards).

From this review, and from playing the game at any length, you will find that Robot Rascals is a highly entertaining and unusual experience. Not only are there several game variations for advanced players, involving 'wild' cards, but the tactics in outmanoeuvering your opponents would not seem out of place in Poker or Whist. On-screen you may actually crash into any opponent, steal his objects, and throw them in the nearest river (thus making it virtually impossible for him to reach them) - that's how dirty this game gets! Conserving energy, and keeping secret your hand of Item cards soon become the only way to stay ahead of your rivals, and the instructions help you considerably with alternative strategies and tactics.

On the minus side, I felt EA missed out on several chances to make this a real classic - the graphics, while cute, are really not up to scratch, the speed of ply is often too slow, and the playing area is probably too small by half. That having been said, I'm sure Robot Rascals gives us a glimpse of how computer games might develop when we've had our share of shoot-'em-ups.

The big question is not whether you'll like this game - I know you will! - but whether the shops will stock it. Major retailers like Boots are getting increasingly boring in the choice of games they sell, often caring more about the shape of their shelves than the products they actually keep on them, and I really can't see a square box like this being ordered in large numbers alongside the boringly standard double-cassette cases. If you can take the trouble to seek this game out rather than accept something else in its place, it may actually receive the success it deserves.

Ariolasoft inform me that the packaging is now a more conventional disk pack - Ed.

Robot Rascals gives us a glimpse of how computer games might develop when we've had our share of shoot-'em-ups.