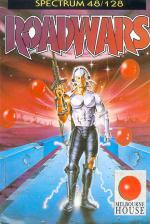 There's a moral in this one. In the early 25th century everyone is living in peace, not doing any work, picking flowers and talking to the trees (rather like the YS office)... apart from the tyrannical Tar'SIans.

Being a fun bunch of baddies they're into B&B (Bovver and Breaking Fings), which brings down the massed GBH of the Galactic Federation on their poor little heads. But does their home planet get trounced? Not one bit of it. Instead, the fall-out falls on Sarac, one of the Federation planets that they've occupied.

Once the dust has cleared it becomes obvious that to save Sarac, first the Feds had to destroy it. Whoops! With friends like that - etc. Not to worry. Everyone goes to the moon - or more accurately, moons - because Sarac, now re-named Armageddon and a major tourist attraction for ghouls who want to gawp at the last world destroyed in a war, has several.

Living in a different orbit to your office could make it hard to get home in time for tea, so the Federation builds a series of adjustable roadways, each computer controlled. But an overheating power-supply in the Spectrum +76 means that these Severn Bridges of the stars are no longer safe. Guess who has to secure them.

Yes, once again you're rolling down the road (fitting, really, as you're driving a sphere), dodging and blasting at various hazards. There are patches of spikes, deadly road markings, bowling balls from hell and worst of all, grey walls which shoot out electronic arcs. These short-circuiting barriers are crucial, because until you've cleared them you can't proceed to the next level.

The roadway scrolls automatically, so all you have to worry about is gliding left and right, lowering and raising your shields, and aiming your gun. You set out with a partner and in two-player mode you'd be advised to work together, though you can also blast each other.

And that's about it. If you can imagine driving down the M4, taking pot shots at the road-works and every Reliant Robin that comes towards you, you've got a pretty good idea of what's involved - and how boring it all becomes.

The graphics are pretty but the pace is sluggish and there's far too little variety in the hazards. A two-player game should offer a twin-joystick option in these days of Plus 2's, particularly when the keyboard responses are a little slack.

The packaging goes on about 'the power of your 16-bit machine' and includes Amiga screen shots. Well, this may be okay for those poor fools who invested a second mortgage in a supermachine with no real games available - but more discerning Speccy owners are liable to drive off elsewhere, real soon.

Drive, dodge and shoot game, with nice graphics but let down by a repetitive set of hazards.

A drive, dodge and shoot game. It has nice graphics but is let down by a repetitive set of hazards.