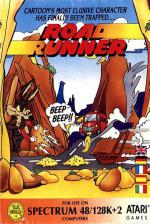 Along the roadways of the wilds of North America Ascuttles Roadrunner, the egged meeping, beeping bird. In paw-blistering pursuit of this elongated sprinter comes the sharp nosed Mr Wile E Coyote, intent upon digging his canines into his prey's scrawny neck.

To escape his flesh-ripping fate Roadrunner can out-sprint the coyote. But if nothing else, the prairie wolf is a persistent carnivore, and he's quite willing to pursue his avian adversary on paw, pogo stick, skateboard and even jet-powered skateboard.

The speeding bird has five fives which are lost if he's hit by an approaching truck, runs into one of the scattered boulders, or isn't spritely enough and ends up cuddling the coyote. Roadrunner can also meet his four feather fall by dropping into gaping crevasses, or stepping upon exploding mines. However both fates can be avoided by leaping over them.

But our hero's energy is .not limitless, and he must gather seeds while he may to recoup his falling reserves. When a seed is missed an on screen message is displayed. Should he fail to pick up five seeds in a row, our sprinting songster faints with hunger and becomes easy poultry for the hungry coyote. But the seeds are not all they seem, some are rich in iron filings, and once lodged in Road Runner's gizzard, Mr Wile can use his powerful magnet to slow down the pesky bird.

Other features include invisible paint spilled upon the road, should either creature run through it, then both become invisible (making Roadrunner difficult to catch, but coyote hard to avoid), and lemonade, with points being scored by the gallant bird for the mouthfuls gulped.

For extra points Roadrunner can play chicken and let the ravening beast get close, then with a burst of speed leave him, poking out his tongue as he goes!

'Beep, beep! Well, the sound is fabulous, I've never heard so many well composed tunes In one game. The graphics are average but the pictures of Road Runner and the Coyote around the edge of the screen are brill. The scrolling landscape behind Roady is done well and is very colourful as are all the other sprites running around the screen. The only thing that gets on my nerves is the way you have to load each level as you come to it. And if you on level two and you get you have to load level again. Quite good, but need a pretty strong recorder to put up with Unloading and re-loading?'

'I was quite Impressed by the presentation of Road Runner - the title screen, with the attractive border and tune (I played the 128 version) were all very nice, but when I started on the game, I was in for a disappointment. The in-game graphics aren't exactly stunning, as colour has been overused to the detriment of the reasonable characters, and I was most annoyed by the machine's finickiness over the placing of Road Runner In order to pick up a pile of seed. Overall, quite reasonable if you're a big fan of the cartoon, but as a stand alone game, it's a bit of a let down.'

'Road Runner is the latest in a long line of arcade conversions, and this game doesn't really improve their image. On the whole the graphics are reasonable with smooth animation but the old problem of attribute clash rears its ugly head once again. The music is actually quite good but I found the poor quality of the Spectrum's sound department meant that it soon became a bit grating. Road Runner's a very simple game; it doesn't take many goes to get into the style of play but I found some initial frustration with the controls to be off putting. If you're a fan of the arcade original then take a look, but I would say that it would be wise to play before buying.'

If you're a fan of the arcade original then take a look, but I would say that it would be wise to play before buying.