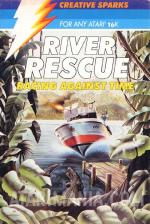 The first thing I noticed was the complete absence of any playing instructions. The game is described as a rescue mission through a jungle to find a team of important scientists. You own a powerful riverboat and aim to collect the reward offered for their safe return.

Soon after starting my journey my problems began. I travelled up the river, shooting crocodiles and destroying logs with my bow-mounted cannon but couldn't find any scientists. No instructions meant I wasted a lot of time before I stumbled across my first scientist by accident. I then discovered (much later!) that I needed to be carrying at least five scientists before the enemy helicopters appear.

After around three hours of play I have yet to collect my "reward". This wasted time could have been avoided with a few guide lines to follow. However, the game has a fully scrolling screen, the graphics are good and sound effects are very realistic. River Rescue does indeed deserve some credit, infuriating as it is. Please, Creative Sparks, let us know what we are supposed to be doing in future.

River Rescue does indeed deserve some credit, infuriating as it is... Sound effects are very realistic.