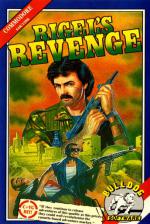 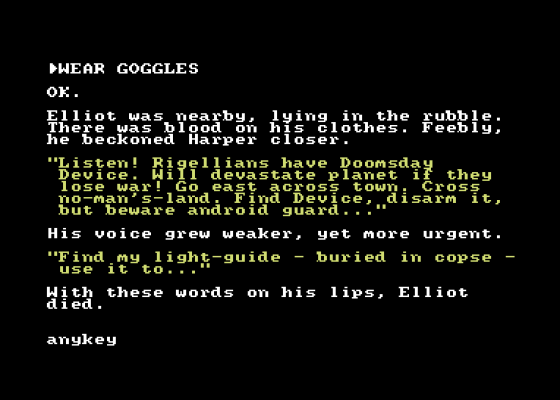 Ah, the 22nd century. I remember it well. Not a good time for the Federation as I recall, but still quite an enjoyable era for individual members of the human race.

Rigel's Revenge, from Mastertronic, places the player on the planet Rigel V, whose inhabitants seem bent on avoiding the grip of the Federation's troops at all costs. In fact, they've even created a Doomsday machine with which they now threaten the very existence of the Federation should it not withdraw from their planet.

The player is placed in the position of Harper, a notorious news reporter who's revered as a man who always gets his story, and as such is sent to Rigel V to dig for information about this rebel force and its machine of destruction.

He arrives on the planet with his team mate Elliot, but unfortunately when the going gets tough Elliot doesn't and is now lying mortally wounded, leaving Harper alone with the unenviable task of finding the Doomsday machine and somehow disarming it.

This two-part adventure begins with Harper waking up somewhat groggily next to his dying partner. A clue to his first move is contained within the text of the loading screen. If not noticed, I envisage the player spending hours trying to begin the game and probably ending up throwing it in the bin. I'm not one to give secrets away so I won't mention that GET GOGGLES, WEAR GOGGLES works very nicely.

Rigel's Revenge is full of atmosphere, and I could say it succeeds in creating a sense of being there... Some of the problems may seem a little obscure at first, but they're entirely in context with the game and storyline, and interaction quickly pulls the player in, so that adjusting to this far-off planet and its current dilemma is fairly straightforward. Sudden deaths abound, and if the player is not entirely observant progress is difficult. All swift-demise locations are warned of in the text description, so they can be avoided.

Rigel's Revenge is a must for all adventure players. The parser is more than adequate, and synonyms for most inputs having been thought of by the programmers. It's full of nasty, yet very enjoyable puzzles, has a certain wit about it, and the game inspires the player to reach the end - and it's also very good value for money. I would suggest it become part of all Commodore owner's adventure collections as of now. Get my drift?

A must for all adventure players. 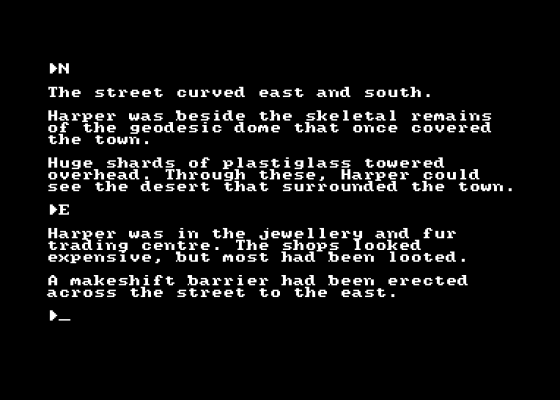