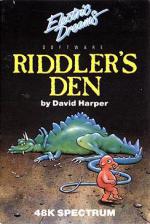 Dougie: Riddle me this. My first is in arcade and my second is in adventure. What am I? (D'you really want me to answer that? Ed), Riddlers Den, of course, this is an arcade game that plays like an adventure.

So, instead of rushing about like a headless chicken through loads and loads of rooms (that all look much the same) and collecting as much treasure as you can before you run out of energy, you'll have to get the ol' grey matter into gear. Otherwise you're not going to get far at all. Not that you can't rush about like a loony if you want to - there's even a bank where you can stash your loot.

Your task is to get your mitts on the Golden Tusk, but don't expect to come close without a lot of brainache. And just to make life interesting, there's a full complement of goblins and ogres, dragons and gargoyles, plus a raging bull and a giant spider.

Just like in a true adventure you can only carry a certain number of objects that can then be used only at certain times or places. Overall, Riddlers Den is both absorbing and frustrating at the same time - it's just a riddle why other games can't reach this sort of standard! 7/10

Ross: Who could resist playing the part of a cute little elephant in search of the Golden Tusk. Great graphics make for a great adventure. 8/10

Rick: Good riddlance to this! It had me going flat out on my tasks for the tusk. 7/10

Both absorbing and frustrating at the same time - it's just a riddle why other games can't reach this sort of standard!