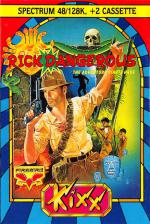 That tricky Ricky Dangerous, leaping, sproinging scaled down version of a pistol totin' hero is back.

But not in a new adventure this time, but finally he's a his way onto budget label. Over two years old now, Rick Dangerous is a multi-level, platform game that has Rick slowly making his way through a series of underground catacombs, collecting points and ammo for his six shooter, and most importantly, avoiding an the traps and pitfalls that the previous owners of this des res labyrinth have left for him.

Play isn't easy but does follow a pattern so that with perseverance you can finish the game and with colourful graphics, great deal of humour (just look at the patrolling nasties haircuts), Rick Dangerous is a good budget buy for anyone that likes an action game that requires a little bit of thought.

Quite a hit when it came out, Rick still deserves a look at even now. Colourful graphics coupled with easy gameplay and brain testing situations make Rick a sure fire budget hero.