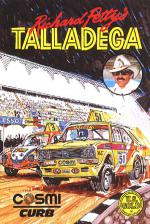 This rather odd-sounding game is set around the Nascar circuits of America (where they race large, powerful cars). You have to take on eighteen other racing cars, including ace racer Richard Petty's on either a tri-oval or random circuit and win, even if it means racing dirty.

Before racing, you must go through a qualifying lap like in Pole Position. The better your qualifying time, the higher your position on the starting grid. If you do badly then you end up at the back end of a rather long queue of mean drivers who are all out to bump you off the track and put you out of the race.

Keeping on the track isn't your only worry, there are tyre wear and fuel guages that require a wary eye - if either reaches zero then you'll be out of the race. However, there is a pit stop facility similar to that in Pitstop II which allows you to get your tyres changed, engine seen to and more fuel.

There are several types of cars on the circuits, bumpers and demons being the major competitors. The main group are easily outdriven, bumpers are slow but try to cut you up and demons are fast, ex-kamikaze pilots who try their utmost to knock you about. If you overtake them then they still give chase and hassle you.

The only trouble with this game is that it's old and suffers from flickery graphics and pretty feeble sound although it remains pretty addictive and challenging, but it has been superceded by games like Speed King and Pitstop II.

This is an old game, and it suffers from flickery graphics and pretty feeble sound... but it remains pretty addictive and challenging.