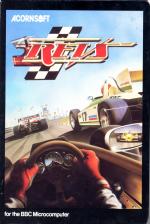 Revs has received the type of pre-release publicity that Elite got before its release - and with good reason.

The game itself is a highly accurate simulation of formula three racing - the very same formula that Acorn themselves sponsor in the form of David Hunt, James Hunt's brother. It was from this experience of racing that the game was born. The game was written in conjunction with David Hunt and the author of the immensely popular Aviator 3D game.

The 3D effects of Aviator have been kept except that they're in full colour. The screen display is excellent and the track is represented perfectly. It is a scale copy of Silverstone with all the twists and bends of the original. One detail is that the hills and changes in level are also featured. Most (in fact all the ones that I have seen) racing games don't bother with hills at all. Not being able to see over a hill to see the road conditions ahead adds quite a lot to the game.

There are two modes of operation. The first practice is where you race around the track on your own to try to get a decent time.

This isn't qualifying practice but merely a chance to get used to the track and conditions.

In race mode, you get a chance to run some qualifying laps, and you can allocate a certain amount of time to practice in before you start the race proper. In this mode of practising your lap times are taken officially, and influence your position on the start grid. There are also other cars on the track practising as well.

Once you start the race, it really hots up. The parallel here will obviously be with Pole Position from Atari, ths game was - until now - the best racing game for the BBC, indeed for other machines as well. Now even this classic has been surpassed. When you are on the starting grid and see all those cars spread out before you (and they will be!) the sense of realism is incredible.

Start the engine and you're off. A point needs to be made here that it is a proper race, and once you have overtaken a car it will stay overtaken. In Pole Position and most other race games, even if you are in pole position (at the front at start up and on the inside for the nearest corner) you will find cars ahead of you once you have started.

All the cars you are racing against have individual characteristics and highly amusing drivers' names such as Max Throttle, Hugh Jengine, and others, the status line on the screen informs you of who it is from and behind you in the race.

Control of the car is through five forward gears and one reverse, accelerator, brake and a clutch-type arrangement. Once in the pits, you can change the wings on the front and rear of the car which changes its handling characteristics.

All in all, the best racing game I have ever seen on any computer, and I play a lot of racing games. A real must for any BBC owner.

The best racing game I have ever seen on any computer, and I play a lot of racing games. A real must for any BBC owner.