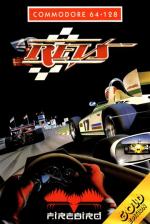 Revs isn't an average run-of-the-mill arcade race game, it's a fully fledged Formula 3 racing car simulator. No grabbing the joystick and zooming off into the sunset at MACH 3, oh no, plenty of practice is needed before you can even get round a simple bend in first gear! You have been warned.

Revs simulates the Formula 3 Ralt RT3 Toyota Novamotor and therefore, like a proper racer, has to be driven with a certain amount of respect. No zooming around corners at silly speeds, you just end up spinning off the track.

The specifications of the car have been copied faithfully, although the computer version has no clutch and an engine tolerant of abuse like excessive overrevving (otherwise it would explode every time a novice played). There are still five gears (and reverse), brakes and a throttle. Steering is done by using two keys, and pressing the space bar amplifies the steering motion. The car's aerilons are adjustable, allowing you to customize the car so it suits your driving best.

The game is viewed from the driver's seat so you can see the steering wheel in front of you with the dashboard and all its dials beneath. The only dial that plays a part in the game is the rev counter. This is used instead of a speedometer since it shows the actual power the engine is producing, rather than the speed the car is travelling. This is far more valid when coming out of corners, since the rev counter shows you whether you're getting optimum performance from the car. The car also has wing mirrors which certainly prove useful at the beginning of a race when you want to see whether a car is close behind.

The car is controlled using either the keyboard, or keyboard and joystick together. Although looking rather ominous to a novice, with practice this setup soon becomes easy to use and is in fact quite comfortable and logical.

Adrenalin flows as the countdown to the race begins. Don't forget to rev the engine to maximize acceleration.

When Revs is first encountered, the car seems very difficult to control, especially with the keys, but once a driver has got used to the control method, zooming round bends counter-steering skids and overtaking in some really tight situations becomes second nature. Using the gears is quite complicated too, but again perseverance pays off.

Revs has two famous British tracks to race around - Silverstone and Brands Hatch. These have been crammed into the 64 with attention to the smallest of details. All the corners, straights, bumps and slopes have been reproduced, it is claimed.

When the game first loads you are given two options: to practise or go for competition. Practise allows you to get used to the 'feel' of the car and the track. This mode clears the track of any other cars and is therefore useful if you want to go for a track record.

Competition mode puts you in a Grand Prix situation. Before you can race you have to go through a compulsory qualifying period so you can notch up a good lap time. How well you do during this period effects your grid placing at the start of the race - the faster your time the better your grid placing will be. You can adjust the length of the qualifying period to last between five and twenty minutes; obviously the longer the time the better your chances of achieving a fast lap time.

Once this period is up, the program asks whether you want to race or go through the qualifying procedure again. If you take the racing option you're then asked how many laps the race is to be run. Once that's been settled, your time is analysed, compared with that of the other 19 cars, and your starting position on the grid is calculated.

You're then placed on the starting grid and the countdown to the race commences. On-screen information during the race includes your current position in the race, which driver is in front of you and who is behind. Your lap and split lap time is also displayed so you can gauge how well you're doing. Once the race is finished, a table of all the cars' finishing positions and times are shown.

When racing you must drive reasonably safely, otherwise you might collide with another car or skid off. If you do, then your car is dropped back onto the track at the crash point and you have to start it up again, which loses you valuable seconds. A nice touch is that if you do hit a car, then it stays on the track for the rest of the race, causing an obstruction.

Revs comes impressively packaged with two manuals and a map of both race courses. One manual explains the workings of the car and gives hints and tips on how it should be driven to give the best results. It also explains the basic principles of racing, finding the optimum line of a bend and the aerodynamics of the car. The other, written with the help of David Hunt, gives a corner by corner breakdown of the two courses and explains the best method of tackling each one.

On first viewing this looks pretty unimpressive. It's only when you get behind the 'wheel' and you can relate to what's happening on screen that the program really comes into its own. The 3D is incredibly realistic and the feeling of exhilaration and 'being there' is paramount. The way the car bounces up and down as it moves along the road is amazing and further adds to the realism of the game.

To a novice Revs is slightly confusing and frustrating because the car is so difficult to control --spinning off the track seems the only thing you'll ever manage. Perseverance reaps its own rewards, however, and within a few hours practice it's possible to go round a track without crashing into anything. The competition mode is brilliant, with tremendous realism and thrills as you battle it out with the other drivers. This is a truly fabulous program - every drivers' dream! Go and buy it.

Acornsoft must be congratulated for their wholly original approach to a simulation. Revs is one of the most exciting games I have ever played - an incredible feeling of actually 'being there' is generated by brilliant graphics and realistic, but initially awkward, control. The program has many superb touches throughout and the presentation is of the highest standard. There are race games and there are simulations, but there's nothing quite like Revs.

Revs marks a total departure from the normal approach adopted by software houses when writing a racing game. Revs is a simulation and not a game at all. Even though simulations usually appeal only to those interested in the pursuit being simulated, Revs had me on the edge of my seat even though car racing isn't what I'd normally describe as exciting.

Though at first it's a bit difficult to play, after some practice things get a lot easier. The sense of achievement once you've managed to complete your first lap is just great. Apparently to recreate the Silverstone and Brands Hatch circuits on computer, complex surveys where taken of the courses. It shows; the dips and bumps of the original tracks have all been faithfully reproduced. Geoff Crammond certainly is an excellent programmer and designer. Hopefully we'll be seeing some more of his work on the 64, like his excellent Starship Command.

Presentation 98%
Beautifully packaged with some very informative manuals and a lot of attention paid to the game itself.

Sound 49%
Below average engine noise and a few skids.

Lastability 97%
Times can only get better.

Value For Money 89%
Rather expensive, but you pay for what you get.

Overall 96%
An exciting and innovative approach turns Revs into simulation at its best.

An exciting and innovative approach turns Revs into simulation at its best.