﻿ Return To Oz (US Gold) Review | Your Sinclair - Everygamegoing 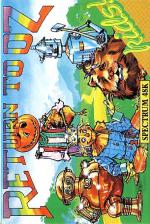 Ding-dong, the witch dead...but that didn't stop Walt Disney making a sequel to the classic film, The Wizard Of Oz.. now turned into a graphic adventure on US Gold's new 'Kids' software label. It requires no text input from you whatsoever, just the ability to read and cope with the use of three keys on the keyboard. The options available to you at any location are always LOOK/TALK/SEARCH/GET/LIST/LEAVE. Pressing SPACE highlights each option in turn, ENTER selects an option and CAPS SHIFT acts as a cancellation key should those grubby little fingers slip. The only option that probably needs further explanation is LIST, which shows you everything that you're carrying and gives you a sub-menu allowing you to DROP something, USE something, or return to the main menu.

Your own return to Oz is the first aim of the game, as something tells you that the friends you left behind there (like the Cowardly Lion and the Scarecrow) are in some kind of trouble. You need to find your red slippers to transport you to Oz, then sort out the trouble when you get there.

Each location is depicted in rather disappointing simple graphics, with the text above and options beneath. You can only select an option if it's actually relevant to the people or objects in the picture. For instance, you begin in the farmyard with Aunt Em and a few hens and chickens. Selecting TALK will cause Aunt Em to flash (so to speak) as she's the only one you can talk to there, while LOOK or SEARCH will have different items flashing. Searching will uncover any hidden items, allowing you to GET them if you wish. Solving the small problems you come across is done by using the objects in your inventory, and if an object is of use in a particular place then it will flash - no flash means you've got nothing that's useful and you need worry no further.

This does tend to make problem solving rather easy, the only thing you really have to do is make sure you've used all the options in each location, some of them twice. To LEAVE a location isn't simply a case of automatically moving on to the next one, as the various exits available will also flash in turn, and a simple map will need to be kept as you move about.

This is a difficult game to assess, as an adult will speed through with no trouble at all, but then it isn't aimed at adults. I've a feeling, though, that younger children will find the 'simple' approach to adventures not quite as simple as all that: sometimes it takes several presses of the SPACE key to make the flashing indicator move on to a second or third object in a picture, and that could cause confusion. It's also a shame that the layout of text on the screen hasn't been properly done either, with stray commas and full-stops wrapping round onto separate lines. There's fun to be had from the program for fans of the magical land of Lions and tin men, but I think 'kids' deserve better than this.

There's fun to be had from the program for fans of the magical land of Lions and tin men, but I think 'kids' deserve better than this.