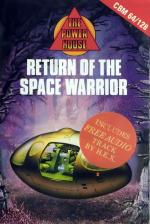 This game shows how far the C64 hasn't moved on. Why Alpha Omega's Power House should drag this old chestnut out defeats me. A handful of UDGs (User Defined Graphics), a few sprites and away you go.

The game consists of three platform levels. Your ship appears on a special pad on one of the platforms, closely followed by the enemy ships. By tapping the fire button you rise and fall, at the same time you can move left or right.

The enemy ships zip around the screen and the idea is for you to land on them! Also, as they disappear their cargo falls out and you have to catch it before it lands to win a bonus. If the cargo does reach the ground you still have to get it or else it turns into a super-mean blue ship. If you take too long wiping out your quota of ships, a mothership appears and chases you around the screen.

Screen after screen of bumper car action gets very boring and dull graphics don't help. As a freebie, the game would be great entertainment, as a paid for it's nothing.

Talking of freebies, a music track follows the game on the tape. No, not the music which could or should have accompanied the game but a dull, undistinguished bit of pop musak which competes with the game for the duffer award.