﻿ Return Of The Jedi (The Hit Squad) Review | Zzap - Everygamegoing 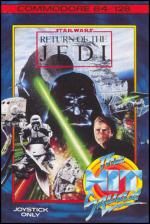 A second Death Star is under construction, a fearsome war machine which the Rebels are determined to destroy before it is completed. A massive attack is launched, only to fall into a trap masterminded by Darth Vader and the Emperor. The Death Star is in fact fully operational...

Based on the Atari coin-op, Jedi utilises three key scenes from the movie. Scene one is the dazzling speeder bike chase through the forests of Endor. The screen scrolls diagonally, Zaxxon-style, as in all the scenes. Here Leia must weave through the trees while dealing with enemy bikes by slamming them into trees, shooting them if they pull in front or drawing them into Ewok traps.

The second scene mixes Chewbacca's attack on a vital command post on Endor with Lando's spearhead assault on the Death Star. Initially, you control a walker with Chewbacca at the controls. The Ewoks don't know this though, and catapult rocks, roll logs and drop bombs to stop it. After a couple of seconds of this, the action flicks to the Millennium Falcon, taking on massive Star Destroyers and waves of TIE fighter. The action keeps swapping between the two assaults until the command post is destroyed.

This brings down a defensive shield, allowing the Falcon to fly into the Death Star. TIE fighters are in pursuit, trying to stop the Falcon from destroying the critical reactor core. Once the reactor is destroyed, the Falcon must escape because, as in most coin-ops, there's a virtual infinity of Death Stars to be destroyed with the whole game looping around and getting progressively tougher.

The speeder bike chase is especially good fun, with the forest, enemy bikes and imaginative Ewok traps combining with a rapid scroll to generate plenty of excitement. Unfortunately the later scenes fail to build on this promising start: they all use the same diagonal scroll but don't have the same excitement and fail to add much in the way of variety. It's not bad for one load, but after you've done it once destroying the Death Star again becomes repetitive. Later levels get bigger and add a couple of new elements, such as hollow trees to fly through, but it's not enough.

In Issue 46, Maff complained that he'd found all the Star Wars conversions disappointing and Jedi was no exception. Gordon complained about the control system and the overall mark was 61%. I'd agree with Maff, but not Gordon - control is okay, and if you're a fan this isn't bad for £3.

Later levels get bigger and add a couple of new elements, such as hollow trees to fly through, but it's not enough.