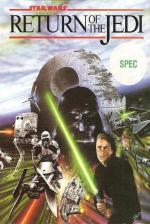 The destruction of the Death Star in Star Wars embarrassed the Empire and gave hope to the Rebels. The Empire Strikes Back saw the destruction of the Rebel base on Hoth and Han Solo's capture, but the majority of the Rebel forces remained free. In Return Of The Jedi Darth Vader has set a trap with a second Death Star, falsely rumoured to be vulnerable to attack once the shield projected from Endor is destroyed. After freeing Han Solo the Rebels take the bait...

No sooner than a Rebel scout team land on Endor than they're in trouble with an Imperial patrol. Princess Leia steals a speeder bike and diverts the patrol into a high-speed chase through the forest. This is the first stage of the game, with the trees smoothly scrolling at 45° across the screen. The player controls Princess Lela, with numerous enemies in hot pursuit. These can be destroyed by being shot, bumped into trees and lead into collisions or Ewok traps. The latter consist of two logs slammed together by the furry Ewoks and ropes strung between trees. Be first through a trap and you get a bonus as well as setting the trap, if you're second you're dead.

If you survive this section you arrive at the Ewok village for celebrations. After that the action switches (except on Level One) to a split-wave effect. At first you control Chewbacca in a Scout Walker on its way to the bunker projecting the Death Star's shield. Rolling logs and catapulted bombs must be avoided. After a few seconds of that the game moves to Lando Calrissian in the Millenium Falcon with two X-wing escorts. In the midst of the Imperial trap, with Star Destroyers on all sides, Lando must survive long enough for Chewbacca to destroy the bunker. The action flips between the two until you either die or succeed.

The final stage has the Falcon flying into the Death Star to blow up the reactor. Various barriers .must be avoided while a TIE fighter on your tail adds extra hassle. As with the other two games you can choose to begin on Levels One, Three or Five.

While I thought Jedi marginally the least of the films, I think it's made the strongest Spectrum game. Rather than use boring vector graphics this has an off-beat, Zaxxon-type perspective and some original gameplay. The Speeder Bike and Walker stages are particularly good: hard but fair with great graphics. The space scene isn't quite as good, bullets are very hard to see against the star field, but it isn't bad, and the final entry into the Death Star is perfectly respectable. With all this compacted into a single 48K load Return Of The Jedi is an irresistible buy.

'Return Of The Jedi has tried to be as faithful to the arcade machine as the previous two games. The graphics are all excellent with smooth diagonal scrolling and fast, fliickerless sprites. All the level are different graphically but they each use the same scrolling routine, making the game slightly monotonous. The main play area is smonochromatic, sound is pretty good though, with tunes at the end of each level (on the 128K). Return Of The Jedi is good fun for a while but the diagonal 3-D can get confusing, making you crash (wimp - Stu).'

'Domark have certainly used the Force here. The excellent Speeder Bike section is totally addictive and a great game in its own right. The other sections, although similar in appearance, all require different skills. The sprites are well-drawn, although Leia's Speeder Bike moves rather jerkily. But this is a minor quibble and doesn't affect the immense playability. As you progress through the levels, new features are encountered, such as the mad hang-gliding Ewok whose bombs are more of a menace than the Death Star. With three skill levels and a great 128K soundtrack, this is an action-packed shoot-'em-up well up to the standards of the previous two games.'

With three skill levels and a great 128K soundtrack, this is an action-packed shoot-'em-up well up to the standards of the previous two games.