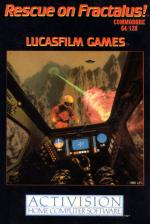 The Jaggies are winning the intergalactic war because they have taken refuge on Fractalus, a planet which is only just habitable. Time is short and our pilots are failing from the skies like flies in an insectocutor, As one of our ace Valkyrie flyers you must rescue the pilots and destroy their damaged ships to keep our high tech systems safe from the enemy.

This is the plot of one of the new games from Activision in their LucasFilm series. To film buffs the name Lucas conjures up the Star Wars series but the heroes of the movie have absolutely nothing to do with this battle (a case of look no Hans).

The planet's name is derived from the fact that the planet's surface is created by the use of fractals. Fractals are the building blocks with which the scenery is produced in professional flight simulators and their use here allows the creation of a terrain which gives a sense of reality. Unlike many simulators, you can actually fly towards and over the distant hills into the valleys and gullies beyond.

Control of the Valkyrie fighter is achieved by the combined use of joystick and keyboard. In addition to an altitude indicator and artificial horizon display, this futuristic craft also has wing tip sensors which indicate how near they are to the craggy mountainsides, energy cell status display, targeting monitor and long range beacon detector.

Each pilot has a radio beacon which emits a signal for you to home in on, but beware, the valleys are guarded by laser bases on the mountain tops and suicide mission Jaggie saucers home in on a collision course. A force shield protects you from these dangers but the power of the attacks sap your precious energy and jolts your ship around.

When you eventually land to recover your pilot you must carefully follow a sequence of actions. Switch off the energy shield, wait for the pilot to run towards you (a nice bit of graphic action here) and knock on the airlock door. Once the airlock has been opened, the pilot will climb aboard and shut the door. The defence systems must then be re-armed, but not too soon or you'll fry your pilot.

The Jaggies are no fools and they have overpowered some of the stranded craft so you must make sure that you can see your pilot approach. If he is wearing a green helmet, he is an alien and must not be allowed on board.

The game has several levels and although the lower levels become quite boring, the action on the higher levels become fast and furious enough even for the most battle hardened player. An exciting action simulation.

An exciting action simulation. The game has several levels... the action on the higher levels become fast and furious enough even for the most battle hardened player.