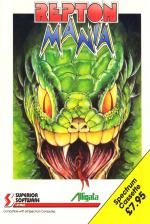 Now let's get this straight from the start: Repton is Boulderdash writ large. In fact 'writ' is probably the operative word, because the two are in places so similar that I'm amazed the lawyers haven't been on the phone.

That said, Repton is a cracking good game - or rather format, because there are two games here, Repton 1 and Repton 2 (imaginative titles, huh?). 'Large' is no less appropriate than 'writ', 'cos both games expand the old Boulderdash formula to bumper size. I mean, take a butchers: Repton's sprite is a sixth the height of the screen.

The name may be familiar, for indeed the two games were, in an earlier guise, two of the most successful games ever on the BBC Micro. No, stop laughing. A good game is a good game, whichever machine it's on, and both Speccy conversions look and play a treat.

Repton 1 is unreconstructed Boulderdash - diamonds, boulders, nasties, the lot. You guide your little chap around the maze, collecting diamonds and trying to avoid being splattered by the boulders that lie around. Much of this is straightforward puzzlework - how to blag the sparklers without being crushed - but when eggs start cropping up, you have to be even more careful. Crack the eggs - and a lot of the time you don't have much choice - and out floats a nasty which sees you not as a jolly playmate, more as breakfast. Irritating-looking safes block the way too, and seem impossible to crack, but find the key (always hidden somewhere nasty) and the sales all open to reveal diamonds. There's a time limit for each screen, and for the first eight screens you also get a map you can toggle to which shows you the detailed layout of your level.

All very well, but for an even more sophisticated bit of fun, all you have to do is turn over the tape and load in Repton 2. This, originally the sequel in BBC land (or had you guessed?), bears the same relation to Repton 1 as Jet Set Willy did to Manic Miner. Suddenly the action is opened up to one multi-level puzzle, thanks to 64 transporters that lie around the place. The idea here is to collect 42 jigsaw puzzle pieces, which when picked up immediately reappear in a section of the first screen, eventually to spell out some sort of message. Meanwhile, though, you still have to pick up all the diamonds (1,634 of them, for heaven's sake), make sure you step over all 4,744 earth sections, use all the transporters and kill all 18 monsters. Not easy. Extremely hard, in fact.

The whole thing is about as complicated as I imagine a game like this could become, but it's devilishly addictive - one of the most compulsive games I've played in months. You're always visiting new screens, getting killed in exciting new ways and being presented with ever more devilish puzzles to solve. As well as all the hazards in Repton 1, there are spirits, which always follow to the left until they reach a cage, and must be avoided at all costs. There are meteor showers, which make things tricky in six of the 16 levels. And there are skulls, which may not move or fall on you but don't exactly like being disturbed either. It's up to you which locations you visit in which order, but you soon discover that unless you do one thing earlier on, your way may be irrevocably blocked a few minutes later.

If you manage to get through all this - and anyone who really gets into the game can look forward to weeks (if not months) of challenging play - you're eventually allowed to reach the last half dozen puzzle pieces (the surrounding skulls conveniently disappear), and the game is over. Needless to say, after two or three days' solid playing, I'm about 1% closer to that seemingly unreachable target.

The whole shebang is, in the end, one of the most addictive arcade adventures for ages - not wildly original (which is why it just misses a megagame), but a superb variation on a classic theme. Use Repton 1 to get you used to the controls and the gameplay, then leap straight in at the deep end and load up Repton 2. Arcade adventure fans (all eleven of us) are not well cared for by software companies these days (Aaaah! - Everybody else), but this is manna from heaven, or at least Leeds, where Superior Software is based. That's not to underestimate Reppy 1 - a perfectly adequate Boulderdash clone - but Reppy 2 is the business.

Two games in one: one a servicable Boulderdash clone (with giant sprites), the other a quantum leap ahead, the best multi-screen arcade adventure we've seen for ages. Triffo.

Two games in one: one a servicable Boulderdash clone (with giant sprites); the other a quantum leap ahead: the best multi-screen arcade adventure we've seen for ages.
Logout