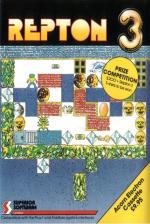 1983 was the year of Repton with the excellent sequel Repton II being noted Game Of The Year for the BBC. At the time that game seemed as advanced as one could push the basic format of underground diamond collecting, puzzle solving and monster evading. Of course, we should have known better.

I'm a great Repton fan. The first two games in the series I find endlessly compulsive and still seem as fresh today as when I first played them. However, I'm pleased to be able to tell you that Repton 3 is even better!

What programmer Matthew Atkinson (taking over from whizz-kid programmer Timothy Tyler) has done is to combine the best features of the first two versions to create a game that is nothing like a repeat of a tired formula.

Thus from Repton we find the basic structure of diamond collecting, boulder dodging and monster-evading together with the idea of passwords revealed on successful completion of a screen; whilst from Repton II we get the complexity and the idea of transporters to move about the screens.

The game has 24 screens comprising of a series of seven screens leading from three given starting screens. These are well thought out and differ nicely, both in terms of difficulty and in the design of the challenges offered. It follows the basic idea of the first two games but there are some mean new twists added this time around!

The most important of these is a time limit to each screen - which concentrates the mind wonderfully! Also to be seen are some new monsters, golden crowns to collect and, most unpleasantly, a fungus which grows uncontrollably and must be blocked by boulders in order to complete some screens.

As usual with Superior games there is a competition; this time based on completing all 24 screens in order and without using any of the passwords - that should sort you out! However, also revealed at the completion of each screen is an editing code which allows you to use the excellent screen/character designer to rewrite any part of the game (including the central character if you wish!). Otherwise, you can use the designer to create entirely new screens and characters.

The designer option to the game is a well constructed and easy-to-use facility and this should be great fun using to create 'challenge' screens for your friends!

This is an excellent game and must be a very strong contender for this year's BBC Game Of The Year. Far from being a pale shadow of the two earlier Repton games, this is a quantum leap forward and should provide you with hours of fun and excitement. If you're looking for mental stimulation as well as the chance to sharpen your digital skills then this really does have it all.

As an instant classic and a new standard in friendliness for other programmers to aim for, the only problem is this: how can they top this next year?

Far from being a pale shadow of the two earlier Repton games, this is a quantum leap forward and should provide you with hours of fun and excitement.