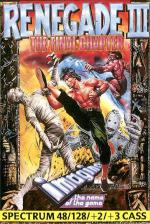 Once upon a time, a Taito arcade machine appeared called Renegade. Ocean bought the conversion rights and released home computer versions, which were very favourably received. A year later they followed up that success with Target Renegade... and now, another twelve months on, Renegade III, dubbed "The Final Chapter", has appeared.

The story follows the antics of Renegade, a martial arts champion whose girlfriend has an alarming knack of regularly getting herself kidnapped by the local oiks, resulting in Ren having to beat 'em up and rescue her. Well folks, it's happened again, and once more Ren has to trog off and free her. But this time it's not just a trip across to the other side of town to rescue the girl - the villains have got their mitts on a time machine and have taken her through space and time to a location in the far-flung future. And Renegade has to follow her through time to get her back. Weird, eh?

The mission of mercy involves battling through four horizontally scrolling levels, each representing a particular period in time, starting with Prehistoric, followed by Egyptian, Mediaeval and finally the future.

Each time zone is filled with period baddies - on the first level there are dinosaurs and cavemen to fight. Each enemy attacks the hero on sight, and attempts to wear down his energy bar, the depletion of which results in the loss of one of Renegade's five lives. Fortunately the hero, being a martial arts expect, can reciprocate with a series of kicks and punches to the detriment of the enemy's health.

At the end of each level, a mass of baddies attack, and if Renegade manages to thump them all into the middle of next week a time portal opens, which takes him to the next level. At the end of the fourth level is Renegade's girlfriend - rescue her and the mission is complete.

All formats are played very similarly - and they're all very tough! Even the most experienced beat-'em-up players will find that they've got their work cut out trying to rescue the kidnapette.

The graphics on all versions are excellent, with whacky cartoon-style sprites giving the game a humorous look and making the game even more fun. This, combined with the challenging gameplay results in a thoroughly enjoyable beat-'em-up with plenty of long-lasting appeal. Proof too, that you can get great gameplay and good graphics on the less powerful machines.

Four levels might not sound a lot, but there's heaps of baddies to bash in each zone - it'll take plenty of perseverence to rescue the girl. The graphics are great, with beautiful hi-res sprites, colourful backdrops and the brilliant sound.

A definite must buy for fans of joystick-controlled violence.

Addictive gameplay and brilliant (though monochrome) graphics makes for a tasty beat-'em-up.

Colourful, highly playable and addictive - that's this version in a nutshell.

A definite must buy for fans of joystick-controlled violence.