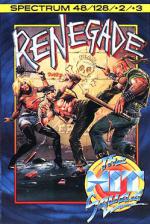 Mr. Renegade is a real hard guy, and he's only happy when gangs of hoodlums kidnap his girlie, so that he can hunt 'em down, and beat 'em up. So it comes as no surprise when you find out that's exactly what he's doing in Ocean's re-released coin-op conversion.

Do your stuff across the five areas of Subway, Pier, Sleazy Street, End Street and the interior of Mr. Big's hideout, doling out the damage to a variety of yobbos who inhabit each level. Clear each stage before the time limit runs out, and make sure you don't lose all your three lives in the process - otherwise it's bye bye to you and yer gal.

Renegade was a smashing piece of fisticuff frolics when it was first released, and nothing has changed this time round. Still highly playable, the game keeps you on your toes from beginning to end with a mixture of fine graphics and absorbing gameplay. Don't miss it!

The graphics are not as nicely defined as those on the Spectrum, and the control system is a tad iffy, but Renegade is still a worthwhile buy.

Crisp, monochrome graphics work well in this well-programmed arcade beat-'em-up, which is a snip at its new three pound price tag.

Great sprites and backdrops, as well as the same high level of addiction as the others, make Amstrad Renegade the best of the bunch!

Keeps you on your toes from beginning to end with a mixture of fine graphics and absorbing gameplay.