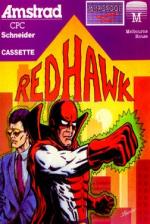 Kevin Oliver. That's all you can remember when you wake up in hospital. Your name is Kevin Oliver. It's only when you step outside that something else springs to mind. Kwah. A strange word but somehow familiar. You say it out loud to yourself, and suddenly, in a puff of smoke, you change.

No longer does Kevin Oliver stand there, but instead, it's a funny man in a cape and a bird helmet. No, it's Redhawk the superhero!

You set off by exploring the town. There doesn't seem to be much of it to explore though. A police station, an art gallery, the library, the town squares, a park, the hospital, a station and a Newspaper Office (not a wapping big one though - this one's in Fleet Street!). Maybe the police can help you but they've never heard of Redhawk and only laugh at you.

A quick check of your possessions at this stage shows that you own a camera and four pounds - not very much. Perhaps the newspaper office can give you some insight into who you are, although you don't hold out much hope. After all, superheroes only work for newspapers in comics, don't they? However, a sign in the office says that there is a vacancy for a press photographer and the editor comes out and hires you on the spot saying that he will pay you if you take some decent pictures for him.

As you wander round in search of a story, a mugger puts in an appearance in the park. If you successfully arrest him, the police will start to trust you and issue you with a radio which will keep you in touch with crime all over the city.

Your days as a crimebusting superhero have begun! Whilst talking to your colleagues, news comes in of a bomb at the local power station, which the police are unable to defuse and which is estimated to go off in about six hours. Obviously, this is your major problem but crime continues elsewhere in the city, usually at the hands of one of the four supervillains. These are the Rat, Hi-Tech, the Mystic Merlyn and Fusor, all of whom have their own assorted tricks and powers. If you neglect these other crimes, your popularity rating falls and characters will be more reluctant to give you the information you need to solve your main problem.

In order to get to these other locations, you will need to find a different mode of transport from Shank's Pony that you have been using so far. You can either catch a train or taxi, but both of these need money, so it is important that you keep taking the pictures. A cheaper way of travelling is to use your superhero powers and fly to a specified destination. The drawback to this is that it costs energy. Redhawk only has so much energy to expend and flying and fighting use it up very quickly. The only way to regain your energy is to revert back to Kevin and let it accumulate slowly again. Two icons show the amount of energy available to you and also your popularity rating.

Control of the game is very simple. The text input is straightforward and there are no obscure words that I have come across so far, athough you usually have to type commands in full. There is a row of commonly used words at the bottom of the screen and these can be accessed quickly by using control and then the corresponding number of the C64 and Symbol Shift plus number on the Spectrum. If you input something that is not understood, the game (or rather the clock) stops and waits for you to hit Space. I found this somewhat confusing at first but it is in fact extremely logical, especially as there is a clock ticking on all the time.

In order to solve the crime about the bomb, Redhawk must talk to lots of characters as he tries to work out who planted it, why, where it is and how to neutralise its threat. Will it be the crooked chief of Police, the corrupt Director of the power station or the mad scientist. Your editor will help keep you up to date with what's going on and, of course, there is always the heroine, the beautiful Lesley who is a reporter on your paper and always turns up when you solve crimes.

One of the nice things about Redhawk is that it's wonderfully tongue in cheek. The muggers say things like "It's a fair cop" and get your name somewhat confused. I've been called Redsparrow, Redduck and Redhorse so far. All this adds excellent atmosphere to an excellent game.

One of the nice things about Redhawk is that its humour is wonderfully tongue in cheek, adding excellent atmosphere to an excellent game.