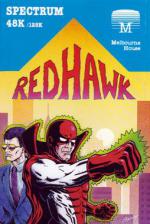 There have already been games based on existing comic strip heroes, but now Melbourne House have created the first original superhero for the Spectrum

Redhawk is a highly original adventure game that attempts to recreate the format of a Batman or Superman style comic strip on your computer screen. In it, you play the part of Kevin Oliver, a mild mannered chap who wakes up in hospital one day, unable to remember what's been happening to him. For some reason the only thing he can remember is the word 'Kwah' which, when uttered, turns him into the ultra-dynamic superhero, Redhawk.

Redhawk has superstrength and the ability to fly, which is probably just as well because Kevin's a bit of a wimp and doesn't even have enough strength to fight an unco-operative librarian.

At the start of the game, Kevin is carrying an unloaded camera whch can get him a job as a news photographer. This will keep him in touch with all the criminal goings on in his home town, and as you go through the game you can choose between playing Redhawk as a superhero or a supervillain, according to your actions at various stages. If you do your best to defeat criminals and sove the main problem of the bomb hidden in the power station, then Redhawk's popularity (measured by a bar meter) will increase, and people will be more likely to trust him and offer help. However, there is always the option of running amok and beating the living daylights out of everyone you come across, but this is likely to get you arrested and slung in jail (though there is a way out of this if you time your identity changes properly).

In some ways, Redhawk is a fairly traditional adventure in that you enter all your commands as text in the lower section of the screen, but the elements of originality lie in the way that the game responds to your input.

The top half of the screen is divided into a row of three cartoon drawings which elect the actions that you make Kevin/Redhawk carry out. The right hand cartoon is updated to show what happens after a command and this then scrolls left, leaving the right hand position for the next cartoon. When, for example, you decide to switch identities by saying 'kwah' one cartoon will show a close up of your face and the word 'kwah' in a speech balloon, the next will be a flashing block of colour representing the transformation, then the final cartoon will show our costumed crusader along with the caption 'Redhawk appears'.

The text editor is very sophisticated, and allows you to store up to ten lines of commands at a time, as well as accepting a fairly wide vocabulary. This saves you having to type out commands over and over, so that if you wish to enter the same command more than once within a short space of time you can just scroll the text display back to the first time you typed it and use it again.

There is also a series of single key entry commands for the most often used adventure words (examine, get, say, save, load, etc) which can save a lot of time.

The text area also has status displays for your current identity, strength, popularity and the time of day, all of which can come in useful during the course of the game.

There are a number of characters and objects in the game that you can manipulate and deal with as you would in any ordinary adventure, but the sophistication of the cartoon strip style of presentation does seem to have eaten up quite a lot of the Spectrum's memory so that the game itself doesn't really match the level of complexity and problem solving that more conventional adventures might offer. After playing Redhawk for a while, I began to feel that I was going over the same ground time quite a lot of the time, and this format would probably benefit from the extra memory of a 128K machine.

In the end it's hard to judge Redhawk as it's something of a hybrid. As an adventure it's not as challenging as a Level 9 game might be, neither does it have the sort of dazzling graphics and action that might appeal to the arcade player. But it does have its merits, and as a sort of eccentric one-off game it could well be worth a look if you'd like to have a break from the more conventional games that are cluttering up the shelves.

A sort of eccentric, one-off game... It could well be worth a look if you'd like to have a break from the more conventional games that are cluttering up the shelves.