Published in Your Sinclair #24 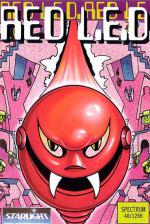 It's a tough life being a battle-droid. Never any thanks, never taken for a pint. No-one appreciates you until a particularly tricky task comes along. They always want you then! And this task is tough. It's a job for a droid with staying power. Your mission, is to traverse the slippery slopes and painful paths of a nasty landscape contained in the Reaktor game Red LED.

Dash about the 3D maze landscape, dealing mega-death to the enemy, while collecting a certain number of pods which enable you to claim this particular territory for your own. Convert a connected row of landscapes on the grid from left to right (or vice versa) and the game is yours. Time then to rest your worn bearings on a comfy bar stool.

Not so fast though! Let's have a butchers at the rest of the game. Graphically very similar to Spindizzy and Marble Madness, but Red LED adds its own brand of excitement to this genre. A delicate touch on the joystick plus a nimble finger on fire button are the two main requirements for successful competition. The time limit relentlessly ticks away while your droid battles its way around the maze to victory. On the way teleport stations must be used to reach those parts others paths cannot reach. Enemy generators can be knocked out to stem the flow of nasties, and other bonus features such as smart bombs, time extenders, and droid-freeze devices can be picked up on the way. Press pause for an overhead view of the landscape if you get stuck!

It plays very well, and what's more, it is very addictive. Perhaps the graphics are not as detailed or colourful as other versions, but the gameplay is faster than the Commie one I tried! The landscapes vary in difficulty, and contain different numbers of nasties, but controlling the three droids on the slopes turns out to be easier than Spindizzy, so game players with a shaky hand should not have a problem. Beating the time limit IS a big problem though - and almost impossible it seems to me!

Overall a good fun arcade zapper, with a twist of adventure chucked in to make things difficult. If you like the thrill of conquering 3D mazes then Red LED is a must.

Cracking Spindizzy/Gyroscope type arcade puzzler. Very addictive and easy to play, but beware, it's no push-over to complete.

A cracking Spindizzy/Gyroscope type arcade puzzler. Very addictive and easy to play, but beware, it's no push-over to complete.