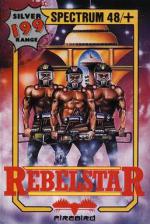 "This is no ordinary game!" gushes the blurb from the inlay. "There is no fancy story or scenario, just you against the computer or a friend. It is a fight to the death. There are no half measures. No truces or pacts. The battle will be hard fought... but the winner will be supreme."

It seems an odd claim that Rebel Star should be extraordinary because it doesn't have a frivolous addition like a fancy story. In fact, Rebel Star is very ordinary indeed. a straightforward kill of be killed tussle between forces fighting for domination of Moonbase Delta. It's certainly adequate considering its limited scope but a story, fancy or otherwise, would have helped.

The game is keyboard only and on one side of the tape is the one player version and on the other a two player option. Briefly, the attackers (Raiders) have to break into the base and destroy the central computer. The defending force are mainly droids. Your capabilities revolve around the acquisition of action points which are distributed before each turn.

All your actions such as picking up, dropping or changing objects uses up these points. Loading and firing a variety of weapons also saps your action points. You are informed as to how many points either an aimed or a snap shot will take, and there's also a mode known as opportunity fire where a shot is delayed until your opponent's turn. The aiming mode is a rudimentary shift the cursor affair and this, combined with weighing up how much each shot will cost in energy terms makes the action very slow.

It's certainly not an all-action shoot-'em-up and the constant need to assess what you can do with your action points makes it more a game for would-be accountants than a spree for the trigger happy.

Given the lack of arcade action, one would have thought that a greater strategy element would have been included but it's been kept to a minimum. There are things to remember if you are attacking the base, such as the combat droids armed with blast torches are the only ones who can destroy airlock doors, and if you succeed in destroying the three laser computers in the base you will get reinforcements. These aspects however only give a token degree of sophistication to the game.

Although the game fails to generate much excitement or involvement, it might appeal to those who like their destruction and mayhem at a leisurely pace and a budget price and don't want to get bogged down with complex gameplay.

Although the game fails to generate much excitement or involvement, it might appeal to those who like their destruction and mayhem at a leisurely pace and don't want to get bogged down with complex gameplay.