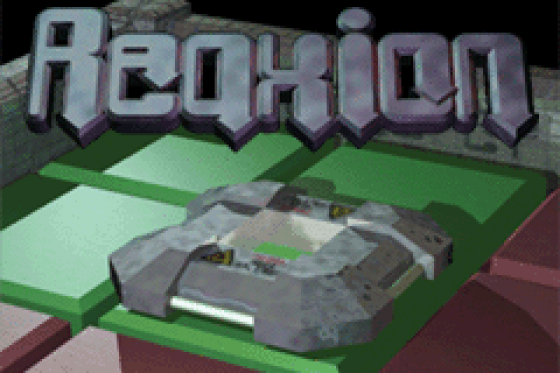 Added to Issue #03 minutes before going to press, Cosine's GBA debut is high-carrat GameBoy gold and unquestionably the best version of their popular game to date. Be sure to grab yourself one of the limited cartridges from the RGCD shop!

Two new releases in one month? Cosine have been unusually busy this summer (probably due to the crappy weather we've been having) and their latest game has made my GameBoy Advance very happy indeed. Coded for the game development competition at this year's Buenzli 16 party, I'll be surprised if WiDDY and T.M.R's GBA conversion of Reaxion doesn't grab an award.

Cosine's Reaxion is officially the group's most ported game; it's simple premise has also been translated from the C64 to the C128, Commodore Plus/4 and Atari XE/XL (with Spectrum, NES and GameBoy Color versions in the pipeline). However, I reckon they'll be hard pushed to beat this incarnation of their popular puzzler.

So what's it all about? Well, the background story sees you playing the role of a nuclear power-plant operative deep in the bowels of the Wenley Moor power station. The plant's main CPU has become infected with a nasty computer virus, resulting in all the immediate shutdown of all safety system and complete randomisation of the reactor core settings. Clearly this is not good news. Your task is to reset all 99 dangerously unstable reactor cores before they go critical. Fail, and its goodbye planet Earth; Succeed, and the government will probably cover up the whole mess and have you permanently 'silenced' anyway - but hey, that's life! 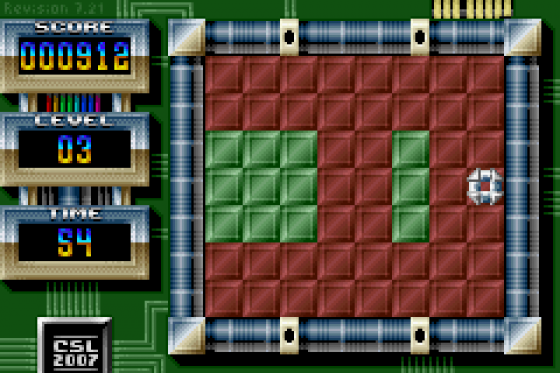 Like all the best games, Reaxion's simple mechanics take a minute to learn but hours to master. Each unstable reactor is represented on screen as a grid of 56 core cells, and the 'live' cores (green) need to be reset (to red) before the timer runs out. You control a core monitor unit that you can move around the grid, with the 'A' button used to set the selected core's status. The catch is that changing the setting of one core has a chain reaction of similarly changing the setting the eight surrounding cells...

It all starts off very easy, but the complexity of the reactor core patterns soon increases to brain-hurting levels. Earlier ports of the game had a handy password system so you could continue progress from a previous game, but GBA-guru WiDDY has gone one step further with this version - your progress (and highscores) are automatically saved, making the game ideal for short bursts of mind-melting puzzle action on the go! Aside from this, WiDDY and co. have incorporated further tweaks to the game unseen in previous ports; on completion of a level the control unit zooms upwards towards the player (similar to the mouse-piloted spacecraft in Chu Chu Rocket) and he's even included an end-game sequence (that I've yet to see).

After playing some of the other versions of the game, I have to admit that Reaxion is far more suited to handheld gaming than I'd previously thought it would be. Upon receiving my pre-release copy I was genuinely surprised at how excellent it is - the game's simple premise, automatic saving and short timer-based levels all add up to make Reaxion GBA one of the best homebrew puzzle games I've played. T.M.R's graphics (including the rendered intro) have all been redrawn and optimized to use the handheld's larger palette and look gorgeous on the GBA's little screen, and I'll never tire of Bexta's awesome soundtrack. The game is sheer class and puts the production values of many other homebrew titles to shame.

It should come as no surprise then that RGCD have teamed up with Cosine to present you with Reaxion as our third homebrew GBA cartridge release - by the time you read this the game will have been added to the catalogue of our online RGCD shop - and at the budget price of £7.00 I strongly recommend that you grab yourself a copy before they sell out.

(Note that the version included on disc is the 'party' release. The final version will be released in the next few weeks and will most likely feature a new audio soundtrack and updated scroller.)

I'm in danger of getting very boring with my views on what handheld gaming should be (see this issue's featured game for several subtle hints). Nonetheless it's worth me butting in here to point out the Reaxion is, at least in game structure another example of exactly how you should do it. Progress can quite literally be made with 30 seconds of play (in fact if you're playing longer than that you're clearly not making progress). However, this is not done at the expense of either action, longevity or challenge. The beauty of Reaxion is that it passes the "We'll leave in a minute dear, I just need to put my shoes on" test of handheld gaming. If you can get a game in before the shoes are located, it's got to be doing something right. 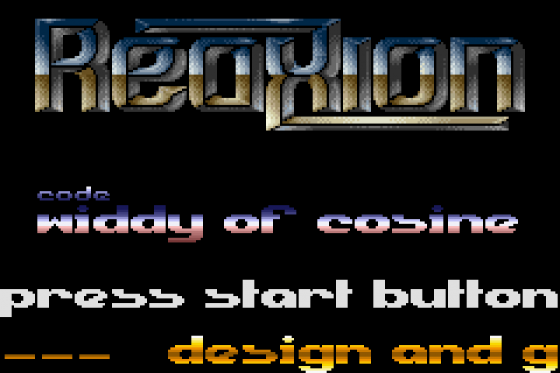 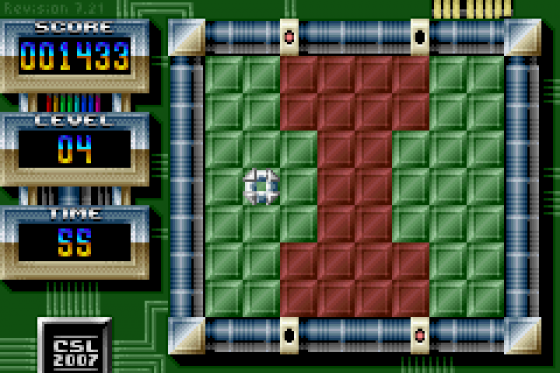 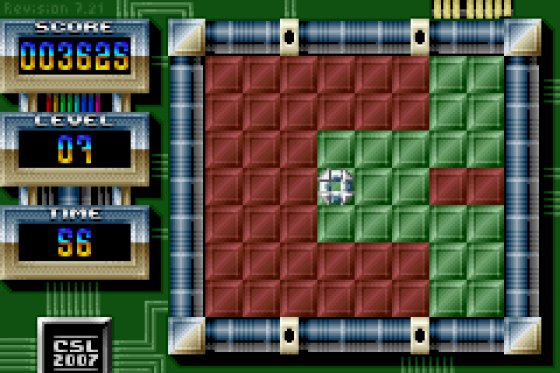