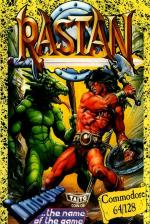 Rastan Saga was one of the coin-op hits of last year and definitely high up on my list of personal favourites.

Something strange has happened in the conversion of the game to the home systems - it's lost the 'saga' out of its title. Programmer John Megan explains "It's to do with the different versions of the game that have been released around the world. The game is called Rastan Saga in the USA and includes a feature where bats are released to administer speedy death if the warrior hangs around too long." The Ocean version is licensed from the Japanese manufactured Taito original and does not punish you with bats if you dilly dally. It's no pushover though, and there are bats aplenty in certain of the caves and caverns.

If you have not tried this game in the arcades, let me describe it to you. Imagine the sword-wielding scraps in Palace's Barbarian, throw in a chunk of Montyesque platform puzzles, and a large measure of arcade action - collecting and using various weapons and planning your route.

The game is an accurate copy of the coin-op in that it is divided up into six levels - each of these levels being in two parts and of a progressively difficult standard.

Like all warrior games there is a story which tells of evil doings and super heroes; giving the nasties a right good going over and restoring peace and tranquility to a once-troubled land.

You play the part of Rastan the warrior king who must confront the evil wizard Karg who has unleashed hordes of monsters on the land. When you finally come face-to-face with Karg he assumes the awful appearance of a multi-headed dragon. To slay him, each head has to be individually lopped off. Not easy - take it from me.

Level One starts you off on a nice 'n easy, flat, rocky terrain - where you can see the nasties edging slowly towards you from afar - allowing plenty of time to swing your sword out and waste them before they can get too close. This does not last for long though, as you soon find you have to climb up ropes, swing across caverns and hop from ledge to ledge if you are to get the fireball sword, hidden somewhere in this level.

Things get harder in the forests of Level Two where you are likely to make your first encounter with some of the nastier nasties. Prominent amongst these is the winged man who attacks when you are attempting to cross a river by hopping from raft to raft as the water bobs up and down. As with all the levels there is a second stage set in the palace of Karg - which must be completed before the next level loads. Yes, it *is* multi-load, but there is no other way this huge arcade adventure could be converted. Disk versions will load the various levels automatically.

If you get to Level Three you will have noticed the similarity of the levels in terms of layout. This is entirely consistent with the original coin-op but, nonetheless, introduces an element of repetitiveness that spoils Rastan slightly.

Level Four is where you start to wonder if you are ever going to complete the game. The nasties are ganging up and attacking in waves. Larger, tougher, baddies come at you - like the Gigas and Chimeras.

The second part of Level Five offers a welcome change in background graphics with caverns rather than castle ramparts. Stalagmites 'n tites stab the air and ground and you also have to lop off the head of a giant dragon at the end of this level. Killing this mother is tough enough, but nothing by comparison with the multi-headed monster that awaits you on Level Six.

Gargoyles and fire-breathing dragons will try to thwart you in meeting Karg head-on in his multi-header dragon guise. You will need all of the combat skills that you have mastered in previous levels if you are to win this one, and read the congratulatory message at the end of the game.

John Megan's interpretation of Rastan is a competent rendition, incorporating most of the games' map. The real problem with the conversion is that the graphics just fail to impress in the way they stunned in the arcades. As it is, it's just another good coin-op conversion, and the game genuinely deserves better.

This is a competent conversion of the arcade, incorporating most of the games' map. But it's a shame that the graphics fail to impress.