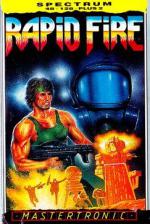 The crime of the month, if not the century, is under way - criminals have made their headquarters in a deserted warehouse and filled it with computer equipment, and they're ready to paralyse the electronic security systems of four victim banks.

There's only one solution, so your police superiors have ordered you to destroy the warehouse and all the equipment it contains.

To do this, four plasma computers must be deactivated. The active (red) rotating plasma vent in each computer is its Achilles ' heel, and should be taken out by a well-directed shot.

But the computers are protected by a swarm of desperate criminals who just don't like an undercover cop that much. You carry a gun for protection against these evil rapscallions and their grenades and missiles (but be careful - while you're busily gathering points, the gun can overheat).

After taking out the plasma computers, you can enter the master level of the warehouse hideout, thus setting off a chain reaction in the central power electrode and foiling the bank robbers' plans for good.

'I'm sick of all these 'shoot every person in sight' games - they were only appealing for a short while, and now they're very tedious and boring affairs. Rapid Fire is the epitome of everything bad about this genre. It has absolutely no content, and it seems pointless going around blasting every single thing that moves. I'm not a pacifist, but all this violence makes me sick.'

'Rapid Fire is a highly boring, unaddictive shoot-'em-up. The graphics look like they were made in ten minutes on a Friday afternoon (some of the enemies weapons are like black lemons, and your own machine gun is a simple stick) and the animation is pathetic. The only decent thing about Rapid Fire is the loading screen, so there's nothing worth buying here.'

'This is the kind of primitive junk I'd have expected from a budget label a couple of years ago. The gameplay is extremely limited, so there's virtually no playability. And the graphics are horribly flickery, with unconvincing animation of the main character - though the characters are nicely detailed. I doubt Rapid Fire will appeal to many; it certainly left me cold.'

I doubt Rapid Fire will appeal to many; it certainly left me cold. The graphics are horribly flickery, with unconvincing animation of the main character - though the characters are nicely detailed.