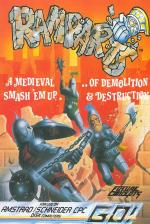 Two knights have been cursed by the evil one and as a result have become marauding giants in this game of medieval mayhem and destruction. One or two players can take part as the evil duo in their attempt get rid of the curse.

The screen has a damage meter and scores for each player at the top. The rest of the screen shows a castle and the surrounding landscape. There are over 90 levels and, to continue onto the next, you must demolish the castle. This is done by climbing up the walls and punching them down. The owners of the castle get upset when their home starts falling down around their ears, so they try and deter you by shooting at you with arrows, cannons and catapults. If the gameplay sounds familiar then it's because Ramparts is a variation on Rampage.

Food can be found to replenish your damage meter and other things cause you harm when you eat them. The guards that shoot at you can be crushed with a well aimed punch, but you can only strike in the direction that you are facing, whereas in Rampage you can punch up and behind you too.

Graphics are colourful and the castles are pretty. The guards are small and ill-defined, but they are the only weak point in the graphics. There's a title tune and one that plays before the game starts and they are both very good. Sound effects are of a similar standard.

In Ramparts you can't hit the other knight when he does something to annoy you and this is a pity because that's part of the fun. The screens are difficult to complete, especially on the one player game where everyone concentrates on hitting you. Climbing castle walls is not very easy because you have to get in the correct position before you can begin to climb. Being able to press the diagonal so that you can climb as soon as you reach a wall would have been much better.

Ramparts might initially look better than Rampage but any notions of superiority disappear as soon as you start playing. The action is far too slow and climbing is too frustratingly awkward. It has exactly the same problem as Rampage in that it gets repetitive, but here you don't even have three players or humour to pep things up.

It would have been distinctly average if it had appeared at any other time, but in direct comparison with Rampage it doesn't come out well.

Staying Power 52%
P. 90 levels to complete.
N. Repetitive after a while.

Repetitive after a while. It doesn't fare well in comparison with Activision's Rampage.