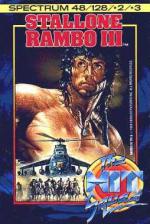 Based on the smash-flop picture of the same name, this game casts you as Rambo (surprise) who's out to kill lots of people (even more of a surprise). Your mentor, Colonel Trautman, has managed to get himself captured by Russians in Afghanistan (a neat trick since there aren't any anymore) and as you can't even pronounce perestroika you decide to rescue the Col and... kill lots of people. (Well, I suppose Rambo Asks Politely For His Colonel Back wouldn't have sounded as exciting.)

So, you have to break into the fort where the Colonel is held, battling past guards and using equipment you find on the way (flip-screen maze collect-'em-up bit), drag the Col along as you set charges on your way to escape (another similar bit) and finally (just to remind you the authors have done better things) blaze your way through the Russian army with a captured tank, in an Op Wolf bit.

Yep, that's right, I didn't think much of it. The Op Wolf bit's rather good, but as for the preceding sections, well, snazzy graphics and nifty features (such as guards that won't attack unless you stumble across their line of sight) can't disguise the fact that one bit of fort looks an awful lot like another.

It all boils down to unending map-manipulate-massacre, and interest drops more sharply than a guillotine blade. It's not bad, it's just not good. The Naked Video of the Speccy world.

It's not bad, it's just not good. It all boils down to unending map-manipulate-massacre, and interest drops more sharply than a guillotine blade.