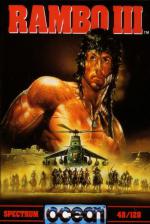 After devastating Vietnam in Rambo (79%, Issue 26) over a decade since peace was declared, Rambo's now on his way to Afghanistan just as the Russians are leaving. His objective is to rescue Colonel Trautman and any of the captured Mujhaddeen our Colonel's been giving missiles to (no doubt to be sold to Iran where they'll shoot down American jets).

Rambo's mission is divided into three sections (separate loads on 48K machines, one on the 128K). In the first section you enter the fort with nowt but a knife for protection. The view is an overhead one, with flick-screen scrolling. Russian troops follow predefined courses unless you trip an invisible security beam, or use a noisy weapon. It you return to a screen all the dead soldiers are miraculously restored to full health. As you explore you'll find a variety of objects, ranging from pistols to mine detectors to rubber gloves. Many items need another object, either an ammunition box or a battery to work, so mapping is essential. One of the most useful items is a first-aid kit which restores you to full health. If you die after that there is one continue play option.

Level Two begins with you having just freed the Colonel and sneaking around the base, looking for eight bombs - planted by Afghan rebels - which must be primed before you can escape. The soldiers here are much more alert, and using a knife to keep quiet does no good at all. The overhead/flickscreen view is the same as on the previous level.

With the Russian base in flames you can hop into a tank for Level Three, and must race to the border at a fair old speed. As you trundle across the barren terrain enemy troops throw hand grenades, machine guns blast away and helicopters swoop down. You fire back Operation Wolf style, zipping a cursor round the screen, while the Colonel drives the tank. There's no ammo limit, but the gun can jam if fired too rapidly.

After the excellent Operation Wolf and Robocop, this is a bit of disappointment. The first section is a good mapping challenge, but retracing your steps every time you die is irksome. Section two is a rather mediocre shoot-'em-up, although at least it's got a spot more colour than the first. The final level is probably the best, both in graphics and playability, but Operation Wolf is obviously a superior variation on the theme.

First impressions of Level One are of a very monochromatic, and rather budgetish arcade adventure. Further investigation improves things but never so really addictive. Section two is a very simplistic shoot-'em-up, with bullets flying everywhere, but little excitement. The final level's probably the best, although not quite good enough to make the game compelling.

First impressions of Level One are of a very monochromatic, and rather budgetish arcade adventure. Further investigation improves things but never so really addictive.