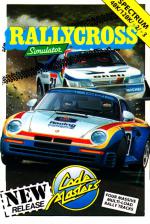 Have you ever watched rallying on the telly and thought to yourself "I wouldn't have done a triple handbrake turn with side twist there. I could do better than that!"...? Probably not, but if you have this is the game for you. I wonder when those masters of code will run out of things to simulate?

In Rally Cross Simulator, you take the controls of a high performance rally car and have to skid and slide around tracks, racing against really awkward opponents. Life is never simple: you also have to keep an eye on fuel, water and oil levels. The performance of the car can also be improved by added turbos, bumpers, gas cans and special tyres, all of which use up the points you've gained. To qualify for the next level, you must finish three laps in the given time.

You view the racing from above and just control the direction the car goes in. I can guarantee your first few goes will hardly get you anywhere: master the way of sliding the car around all corners before you attempt to get onto the next track. The game sports healthy amounts of colour and a tune and effects to get your ears around. The best graphics in the game are the ones on the large car at the bottom of the screen.

The idea of including a pit stop puts this above all the other boring car race games released in the past. It is in the shape of an animated lorry that has icons for fuel, oil, etc. You move the pointer around the lorry and change the amounts you have. You have to be quick in choosing though, because the counter still ticks on.

Rally Cross Simulator brings back all those happy days spent with things like Scalextric. Quite an enjoyable game.

Brings back all those happy days spent with things like Scalextric. Quite an enjoyable game.