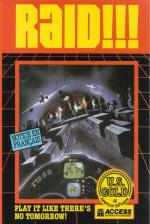 On previous micros, this was a controversial game because of the politics involved, but with its conversion to the Amstrad, the scenario has been changed. No longer are you blowing up well-meaning Soviet citizens but instead you're blowing up evil, nasty and totally fictitious Shandorians.

The Shandorians have launched a devastating missile attack on several of your cities. This is shown on a map of the northern hemisphere with the launch sites, targets, missiles and a satellite shown. The satellite is the base from which you must thwart the attack. Inside it are nine fighter planes which must be used to destroy the enemy missile silos, and hence their missiles, as well as their defence centre.

The first task is to get the fighter planes out of the satellite hangar. This is easier said than done. The hangar appears as a single screen with a door near the top and the planes lined up on the right hand side. To get each plane out you have to control forwards, sideways and vertical thrust to aim it through the door. You also have to open the door, which has the nasty habit of closing automatically. Crashing into the walls, doors or ceiling is fatal and it may take many runs before you get the hang of getting the planes out regularly.

Once a plane is out, you can switch to the map screen again and guide a dot (the plane) into a white launch site from where the missiles emanated. The display switches to a right-to-left scrolling display where you can bank the fighter left and right and increase or decrease height. As you move over the landscape you have to avoid everything, remembering that, unlike Beach-Head, this has 'true' 3D. Tanks, missiles and a helicopter are the main worry as they home-in on you and shoot back. Static obstacles can sometimes be shot, as can their more dangerous moving pals, but even the ones that can't, like trees and concrete blocks, are fatal if flown into.

If the fighter survives this run the screen changes to show the five silos at the launch site. The plane is at the bottom of the screen with the silos lined up at the top. Each silo has a slit in it which has to be shot through to destroy it. To do this you have to be at the right height and horizontal position. This is complicated by the silos and an enemy plane shooting back and the main silo having to be shot last. Success at this stage takes you back to the hangar with four extra planes (if you lost any) and another launch to contend with.

Each launch has to be dealt with in a limited time or one of your cities gets nuked and you lose a whole stack of points. When the last launch site is destroyed the fighter repeats the scrolling attack run to get to the defence center. Here he takes control of a single man at the bottom of the screen firing a bazooka.

On the rest of the screen are a building housing a nuclear reactor and guards on the walls who shoot at you. All of the guards and the doors on the building have to be shot in order to reveal the reactor and let you enter it. The problem is that the guards and a tank can shoot you and keep reappearing a while after being shot.

Once inside the reactor your man controls a number of discs which are used to destroy a pulsing robot. To do this the discs have to be bounced off the back wall to hit the robot in its vulnerable back. This isn't easy since he keeps moving around, shoots back and doesn't take kindly to being struck on the front. This has to be done eight times, the last four times within a two minute time limit. The reactor will blow up after only four hits but for you to get out the other four are needed.

The final sequence is of the centre blowing up with you flying away if you got out. With all the sequences the game demands a lot of different gameplay elements and has some very slick graphics on all of them. It isn't easy to complete, or even get started at, but with practice becomes very rewarding. One of the best shoot-'em-ups yet.

I was really a bit disappointed that the name and scenario had been changed. I quite liked zapping the reds. Of course, I'd have been just as happy zapping the Yankees. But Raid is an excellent shoot-'em-up that requires not just bloodthirstiness, but a certain amount of finesse. In fact, your biggest problem may be in getting your planes out of the hangar in the first place!

N. Getting out of the hangar can be a real problem.

In its original form on other micros, this game was called Raid Over Moscow and featured missile launches from "Minsk to Miami", "Leningrad to New York" and so on. This, combined with the tasteless task of blowing away Soviet guards outside the Kremlin (defence centre) and then destroying Moscow with a nuclear explosion, didn't go down too well with many people - including me.

The bit about shooting guards still isn't entirely wholesome, but then neither was Space Invaders. Without the warmongering, it removes nasty overtures from the program and leaves us mindless, violent shoot-'em-up fans to blast the living daylights out of something without getting a dodgy conscience.

It was always a storm in a teacup, but it's nice to see the back of it - we could do without controversial politics in computer games.

Slick graphics, colour and animation... Terrific gameplay for all stages combining to make a great whole.